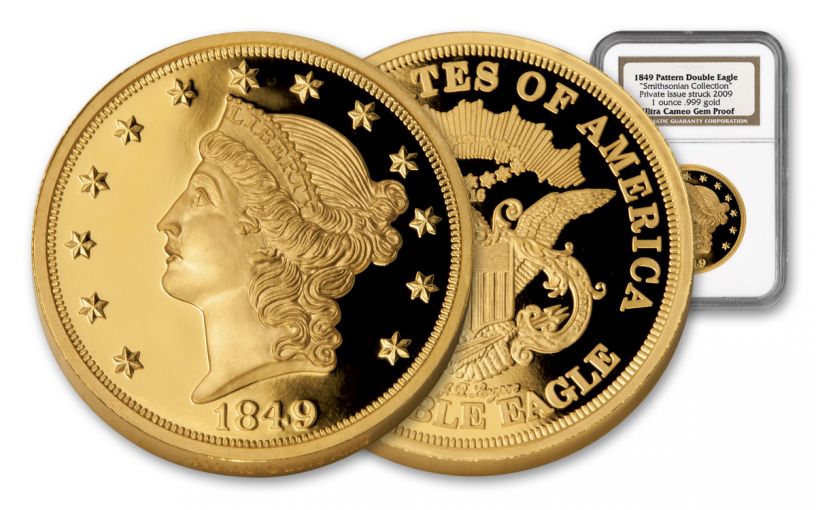 Availability: Out of Stock
This item is currently Out of Stock. Please sign up to be notified if this product becomes available.
Item #
184180
Add to Wish List Add to Wish List Wishlist is for registered customers. Please login or create an account to continue. Add to Compare
Recommended Products
Product Description

One-of-a-Kind Coin Gets New Life Through a Smithsonian-Licensed Re-Strike!

Manifest Destiny ran strong in the mid-19th century, and the California Gold Rush fueled American expansion in a way that nothing else could. So dramatic was its effect that California is today by far the largest state in the union by population. The Gold Rush created a unique problem for the U.S. government, namely that too much gold was arriving at the Philadelphia Mint. In response to the issue, Congress issued the first ever double eagle, which began production as proof in late 1849.

Only one such coin survives today, and it is housed within the fabled halls of the Smithsonian®, and is believed to be one of the most valuable U.S. coins in existence! It’s the Holy Grail for collectors, but the Smithsonian isn’t letting go – not even when J.P. Morgan himself offered up a fortune for the piece – nearly a million dollars in modern currency.

No one will ever own the 1849 Double Eagle Pattern – but thanks to special permission from the Smithsonian, you can take home a beautiful 1849 Longacre Double Eagle Pattern Proof. The only proof officially authorized by the Smithsonian, these pieces come struck in a full ounce of 99.9% gold, certified by the Numismatic Guaranty Corporation (NGC ) as being in Ultra Cameo (UC) Gem Proof condition.

Rarity is one of the most appealing qualities of a coin or round to serious collectors, and it doesn't get any rarer than a single surviving piece. That one, of course, is not for sale because it is owned by the Smithsonian. You can't own the original, but you CAN own the next best thing: An extremely limited reproduction from a mintage of just 500 gold pieces.

For collectors who want something that just about nobody else has, opportunities like this almost never come around. Don’t miss your chance to own the proof that J.P. Morgan never could and secure yours now!

Order yours at GovMint.com now or risk never being able to own a piece of this remarkable gold tribute release.