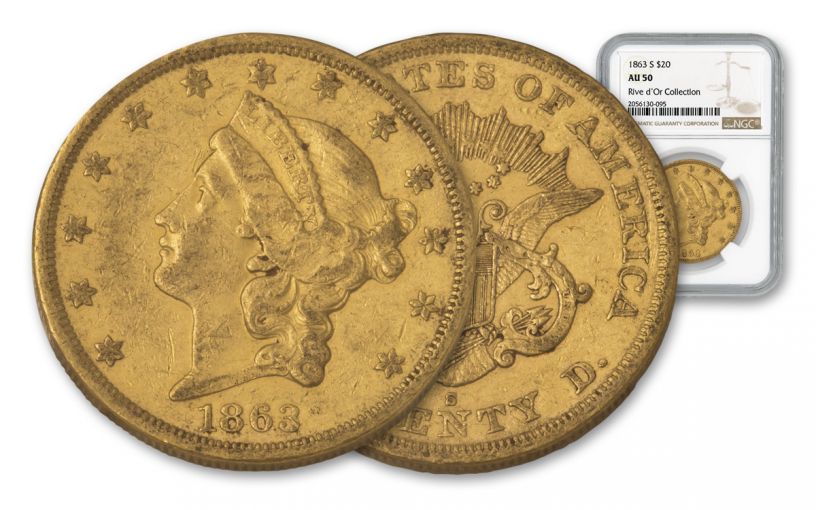 Availability: Out of Stock
This item is currently Out of Stock. Please sign up to be notified if this product becomes available.
Item #
350553
Add to Wish List Add to Wish List Wishlist is for registered customers. Please login or create an account to continue. Add to Compare
Recommended Products
Product Description

This highly sought-after coin was struck in 90% fine gold in1863 at the San Francisco Mint and has been graded by the Numismatic Guaranty Corporation (NGC) as being in About Uncirculated-50 (AU50) condition. As if its connection to the Civil War were not enough, the coin is also significant because it comes from the Rive d’Or Hoard, one of the largest and most significant gold coin collections ever assembled.

In addition to your 1863-S $20 Gold Double Eagle, you’ll also receive an 1864–1865 Vanishing Coins of the Civil War Three-Coin Set containing first-year issues of the Indian Head Cent, Two Cent piece and Three Cent Nickel; an 1863 25 Cents Fractional Paper Currency Note – issued due to a lack of circulating coinage during the war; a storybook on coinage during the Civil War; and an authentic, unused Civil War bullet. This bonus pack has a total value of $159.95!

Struck more than 155 years ago as a bloody civil war tore the nation apart, this coin has finally returned from Europe and is just waiting to join your collection. Click it to your cart and make this coin one of the prized items of your own personal hoard!