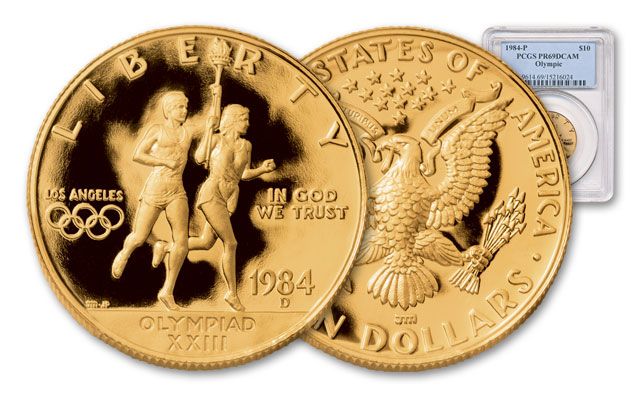 Availability: Out of Stock
This item is currently Out of Stock. Please sign up to be notified if this product becomes available.
Item #
251622
Add to Wish List Add to Wish List Wishlist is for registered customers. Please login or create an account to continue. Add to Compare
Recommended Products
Product Description

In 1984, the Summer Olympics were held in Los Angeles, CA, and it proved to be a banner year for American Gold. The U.S. won a total of 83 Gold medals in that Olympics - then a record for first place finishes - in a wide range of sports including archery, basketball, boxing, cycling, diving, equestrian, gymnastics, rowing, sailing, shooting, swimming, volleyball and wrestling. Quite a line-up!

Fitting, then, that this version of the $10 Olympic Gold Coin is in near perfect condition - the better to show off its iconic design. Created by U.S. Mint Engraver John Mercanti, the obverse design of the coin is based on a sketch from James M. Peed. It features two athletes racing forward as they bear the Olympic torch. Surrounding the runners are the inscriptions "LIBERTY," "IN GOD WE TRUST," "LOS ANGELES" surmounting five Olympic rings, the date "1984," and "OLYMPIAD XXIII." The reverse of the coin, also designed by Mercanti, follows a familiar and beloved trend of Mercanti coins. It features a soaring eagle carrying an olive branch and arrows in its talons. Thirteen stars and the phrase "E PLURIBUS UNUM" soar above the eagle, along with the inscriptions "UNITED STATES OF AMERICA" and "TEN DOLLARS."

The 1984 $10 Olympic Gold Coin was struck at the West Point Mint as a Proof, which requires a specialized minting process and involves uniquely-prepared dies and planchets. These planchets are struck multiple times to bring up the full detail of the design in cameo appearance. This gorgeous coin has been further graded PR69 by the National Guaranty Corporation (NGC) - marking it as a virtually perfect coin with no discernible marks! What better way to enjoy your coin in .900 Gold?

The year 1984 is still remembered as the year American took a record amount of Gold. Now you can take Gold too with the 1984 $10 Olympic Gold Coin. But act fast - quantities at this impressive grade are limited! Contact GovMint.com today to secure yours.