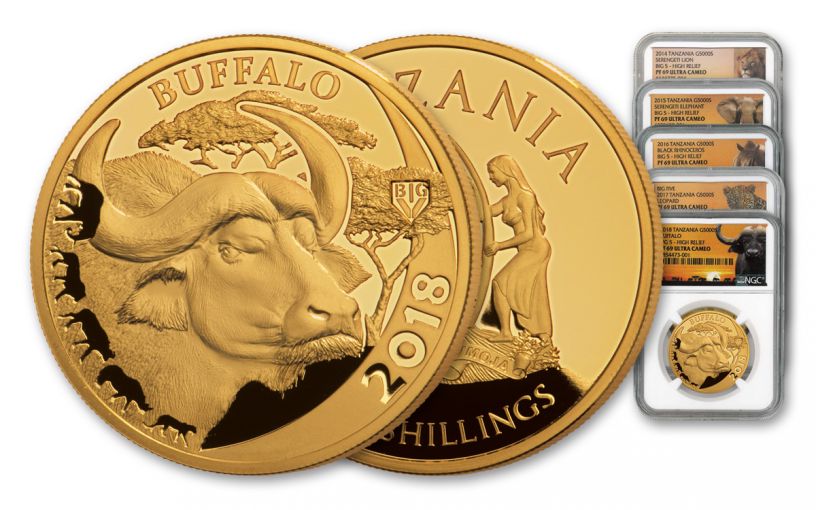 Availability: Out of Stock
This item is currently Out of Stock. Please sign up to be notified if this product becomes available.
Item #
338482
Add to Wish List Add to Wish List Wishlist is for registered customers. Please login or create an account to continue. Add to Compare
Recommended Products
Product Description

If you're on safari in Tanzania's Serengeti National Park, your eyes (and camera lens) will be trained to look for the fabled "Big Five." Originating in the 19th century, this classification designated the lion, elephant, buffalo, rhino and leopard as the most dangerous and fearsome animals on the African plains. This “Who’s Who” of exotic animals was used by big-game trophy hunters to describe the most difficult and dangerous African animals to track.

Today, that same list is used to describe majestic animals that, while still elusive and unpredictable, are becoming increasingly (and alarmingly) endangered – as well as a short checklist of "must capture" animals for wildlife photographers. It’s also the basis for Tanzania’s incredibly popular “Big Five” series of coins.

Here’s your chance to get the complete five-piece set of highly-pure one-ounce gold coins. Each coin in your set also comes graded by the Numismatic Guaranty Corporation (NGC) as being in perfect Proof-69 Ultra Cameo (PF69UC) condition, a distinction that means your perfectly-graded proofs will have ZERO imperfections – showing all features and fields exactly as the engraver and mint intended! The Proofs in the set are:

Now, you don't have to risk ending up on the wrong end of the food chain – you can bring all five animals home today with this 2014-2018 Tanzania One-Ounce Gold Serengeti “Big 5” Complete Five-Proof Set! Each proof in your set will come graded by the Numismatic Guaranty Corporation (NGC) as being in perfect Proof-69 (PF69) condition, a distinction that means your almost-flawless proof will showcase an impressive full strike and indistinguishable imperfections – well above and beyond the quality of the vast majority of coins in the series!

Coin series like Tanzania's "Big Five" and the "Natura" from South Africa have been attracting fans for years, making them among the most popular in the world. Each release brings new collectors into the fold! Don't miss out on adding these coins to your collection – order your own complete set of 2014-2018 "Big Five" gold proofs today!