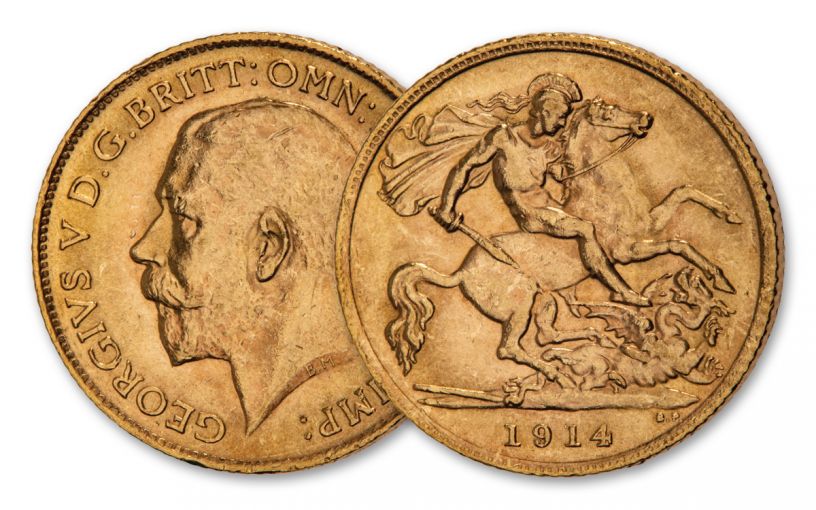 Availability: Call-In Only
This item is only available on a Call-In basis. Please call 1-800-510-6468 to speak to a representative.
Item #
351852
Add to Wish List Add to Wish List Wishlist is for registered customers. Please login or create an account to continue. Add to Compare
Recommended Products
Product Description

Found! An Amazing Hoard of 100-Year-Old Gold Half Sovereigns!

Recently a fantastic treasure trove of gold coins was discovered in Northern England. The hoard consisted of 250 British Gold Half Sovereigns, each dated 1914 – the same year World War I began! More remarkable than their age, however, is their beauty. Each looks as though it could have been struck yesterday. In fact, each has been graded as being in Brilliant Uncirculated (BU) condition!

Clearly, whoever buried the coins didn’t trust the banks and wanted a quick way to get out of the country. Unfortunately, they never got to their gold, and so it was left buried and untouched for over 100 years! The owner of these coins made an excellent choice though – struck in 90% pure gold, Sovereigns were also given to combat pilots as a way to buy their way home if they went down over enemy lines.

These coins feature the classic design of Saint George slaying the dragon the reverse as originally created by Benedetto Pistrucci for the 1817 Gold Sovereign. King George V is depicted on the obverse. Hoard like these are always exciting, but the age, condition and quality of these coins is breathtaking! Secure an historic piece of WWI history from the exciting North of England Hoard of 1914 British Gold Half Sovereigns!

Grab your piece of the North of England Hoard with this 1914-dated British Gold Half Sovereign in Brilliant Uncirculated condition. Don’t miss the chance to secure a coin form this amazing discovery; click one to your cart right now!