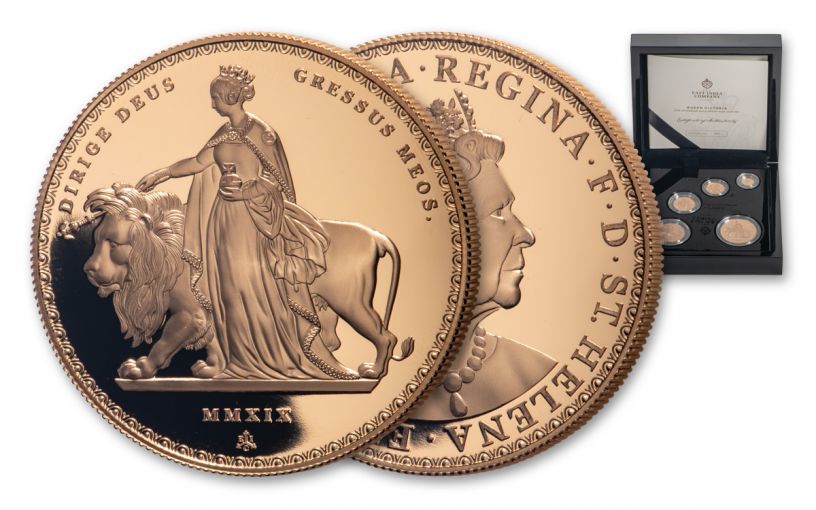 Availability: Out of Stock
This item is currently Out of Stock. Please sign up to be notified if this product becomes available.
Item #
350585
Add to Wish List Add to Wish List Wishlist is for registered customers. Please login or create an account to continue. Add to Compare
Recommended Products
Product Description

Celebrate the Most Iconic Coins of Victoria’s Reign

2019 marks the 200th anniversary of Queen Victoria’s birth. Becoming Queen at the age of 18, Victoria reigned from 1837 to 1901 – a total of 64 years – and was the longest-reigning monarch in British history until she was surpassed by her great-great-granddaughter, Great Britain’s current monarch Queen Elizabeth II. Synonymous with the British Empire’s industrial and economic expansion of the 1800s, her name is used to describe the times – The Victorian Era, an age when it was said the sun never set on the British Empire.

To pay tribute to the bicentenary of Victoria’s birth, the East India Company revisited some of the most beautiful coins minted during her celebrated reign with this special limited-edition five-piece proof set. Struck in 91.67% (22 karat) gold, each coin in this set features the Five Sovereign Una & The Lion design, the Double Sovereign Gothic Crown, the One Sovereign Half Crown Shield, the Half Sovereign St. George & the Dragon, and the Quarter-Sovereign Seated Britannia.

Released by the East India Company on behalf of Saint Helena, a remote British Overseas Territory located in the South Atlantic Ocean, this collection is limited to just 200 sets. Plus, each legal-tender coin has been struck in gorgeous Proof condition, with frosty devices and blazing mirror-like luster from the highly polished fields. Each design is an important piece of British history and makes the perfect addition to any historical or British coin collection.

With such a small mintage, there are obviously far too few to go around. Hurry; add a piece of the Victorian Era to your collection now with the 2019 Saint Helena Gold Sovereign Queen Victoria Five-Piece Proof Set!

Thanks to the British television series Victoria starring Jenna Coleman, the popularity of the Royal Family, and the epic 200th anniversary of her birth, Queen Victoria has never been hotter. Don’t miss out; click one of these sets to your cart today!