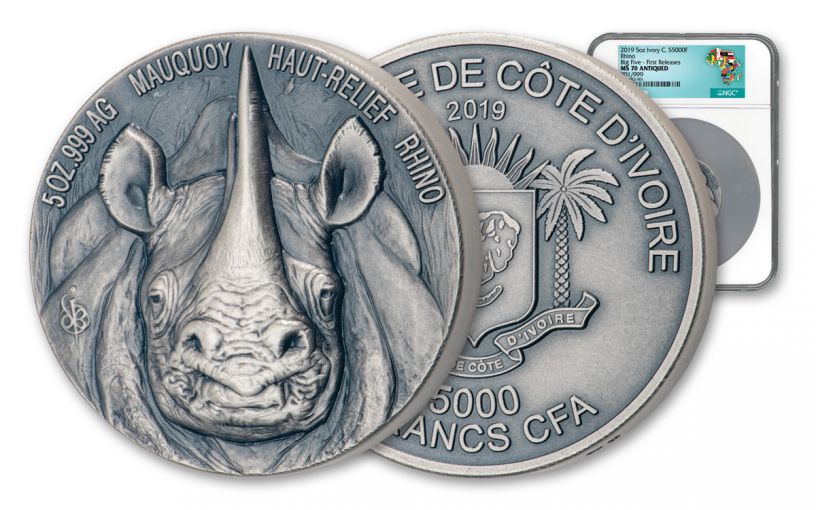 Availability: In Stock
This item will ship within 2 business days.
Item #
352492
CC Payments as low as
$298.33 / month
Add to Wish List Add to Wish List Wishlist is for registered customers. Please login or create an account to continue. Add to Compare

So, you find yourself on safari in South Africa when an ill-mannered, bad-tempered, piggy-eyed Rhino spots you. He lowers his head and charges. What do you do? Well, if you want to avoid being smeared by the big fella’s pointed horn and massive odd-toed feet, the best thing to do is… nothing! That’s because despite their massive size – males can weigh more than 3,000 pounds – and their “you’ve-got-to-be-kidding-me!” speed that tops out at 34 miles per hour, rhinos have very poor eyesight and have a hard time detecting anything more than 30 yards away.

While you can escape the aggressive charge of a Rhino by doing nothing, you’ll want to do something to make sure you capture the Rhino on this coin – the massive piece features an ultra high relief image of a Rhino that looks like he has caught your scent and is about to sprint off this coin and squash you like a bug!

The latest in the Ivory Coast’s Big 5 coin series of African animals, this 2019-dated Rhino Ultra High Relief Coin was struck in five full ounces of highly pure 99.9% silver. Thanks to the incredible ultra high relief detail and special antiqued finish, the effect is extraordinary on this 50 mm coin! This series has proven to be so popular that the previous three editions – the 2016 Lion, 2017 Elephant and 2018 Leopard – are among our customers’ most frequently asked-for coins!

This legal-tender 5000 Francs coin has been graded by the Numismatic Guaranty Corporation (NGC) as being in flawless Mint State-70 (MS70) condition, a distinction that means your perfectly-graded coin will have ZERO imperfections – showing all features and fields exactly as the engraver and mint intended! In addition, NGC has certified that your Silver Rhino is a First Releases (FR) coin, a designation that means it was received by NGC or an NGC-approved depository within the first 30 days of the coin’s release. Collectors seek out these coins because they are produced with new dies and considered to have sharper strikes and deeper mirrors than those that are struck later.

With just 999 of these superb coins available for worldwide release, the time to act is now! A Rhino may have wrinkled and ill-fitting skin that ensures it is always in a very bad temper, but the only thing bad tempered about this coin will be you if you miss out on bagging one. Our supply will not last long so click one to your cart now!