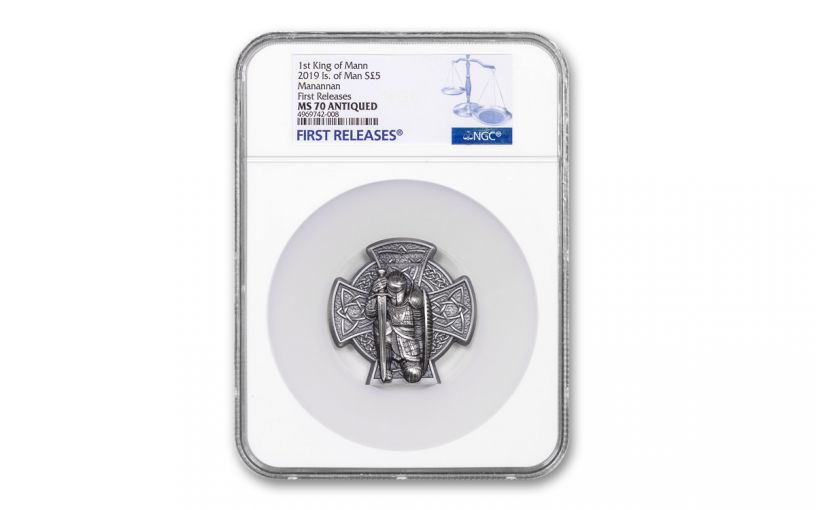 Availability: In Stock
This item will ship within 2 business days.
Item #
347884
Review this product
CC Payments as low as
$224.50 / month
Add to Wish List Add to Wish List Wishlist is for registered customers. Please login or create an account to continue. Add to Compare
Product Description

The Mann, the Myth, the Legend

On an entire island of men made myth, none stand taller than Manannán, first king of Mann. Wielding a sword that could cleave through any armor, riding a horse that could walk on water, and protected by a breastplate that could not be sundered, Manannán was a guardian to his people. Now he has been revived and is ready to serve once more.

Manannán returns on this breathtaking cross-shaped coin struck in three full ounces of highly-pure 99.9% fine silver. Minted by Coin Invest Trust (CIT) for the Isle of Man, coin is deeply ornamented and richly layered with an antique finish to further showcase its incredible attention to detail. With its mixture of high relief combined with CIT’s patented Smartminting© technology, this coin is rife with classic Celtic symbols combined with a stylized field that takes on the appearance of an ancient hammered metal.

Your 2019 Isle of Man £5 Manannán Three-Ounce Silver High Relief Coin has been graded by the Numismatic Guaranty Corporation (NGC) as being in flawless Mint State-70 (MS70) condition, a distinction that means your perfectly-graded coin will have ZERO imperfections – showing all features and fields exactly as the engraver and mint intended. In addition, NGC has graded your Silver Manannán Coin to be a First Releases (FR) coin, a designation that means it was received by NGC or an NGC-approved depository within the first 30 days of its release. Collectors seek out these coins because they are produced with new dies and considered to have sharper strikes and deeper mirrors than those that are struck later.

The look and feel of the coin perfectly captures the rich folklore of the Isle of Man. Often referred to simply as “Mann,” The Isle of Man is a small island located between Ireland and England and is home to a plethora of heroes, champions, and legends. The reverse of this coin depicts Manannán, the island’s greatest champion adorned in his invulnerable armor and kneeling with Fragarach, the sword no shield could defend against. Engraved on the mythical weapon is the iconic Coat of Arms for the Isle of Man; the three-legged Manx triskelion, or the Three-Legs of Man. Above him is inscribed “Manannán 1st King of Mann.” The coin’s reverse features the portrait of Queen Elizabeth II – who as head of state is the current Lord of Mann.

Just 999 of these incredible coins will be struck for worldwide release, and each coin in this offer will come in its original government packaging. Strike now to secure your amazing Manannán Silver Cross!

With the use of Smartminting© technology, the first king of Mann is reborn in impeccable detail. But he won’t be around long. A mintage of only 999 coins means that the Lord of the Sea will soon fade back into legend.