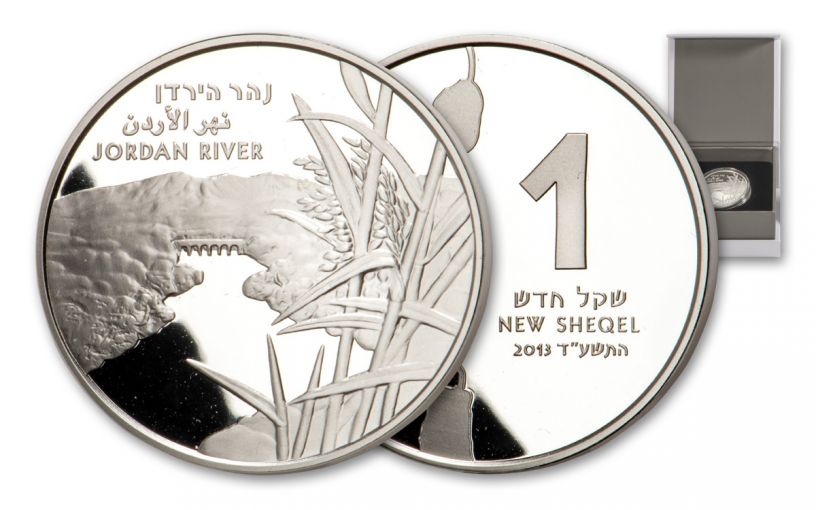 Availability: In Stock
This item will ship within 2 business days.
Item #
362952
Add to Wish List Add to Wish List Wishlist is for registered customers. Please login or create an account to continue. Add to Compare

What a find! Struck by the Bank of Israel for its “Views of Israel” series, these silver coins not only pay tribute to some of the most iconic locations in the country but are released with such limited mintages that it makes finding any of them very difficult. But thanks to our connections in the coin world, we’ve managed to track down a small hoard of these coins!

In this offer, you can secure the 2013 release that pays tribute to the Jordan River. The lowest river in the world, the Jordan River flows north to south through Israel along a 150-mile-long route that connects the Sea of Galilee to the Dead Sea. This is the river that Joshua led the Israelites across to “The Promised Land” and where Jesus was anointed by John the Baptist. Today, thousands of Christian pilgrims from all over the world travel to the spot where Jesus was believed to have been baptized to be baptized themselves or reaffirm their Christian faith. The coin’s design features a view of the hilly northern part of the river’s course with a vegetation in the foreground and the Hermon Mountain range in the background. The coin’s reverse displays the Israel State Emblem, the Jordan River as it appears on the map, and “ISRAEL” in English, Hebrew and Arabic.

Struck in 14.4 grams of highly pure 92.5% Sterling silver, this coin is a legal tender One New Shequel coin. The New Shequel replaced the hyperinflated Old Shekel on January 1, 1986 and is divided into 100 Agora. This piece also comes in beautiful Proof-Like (PL) condition, meaning that even though it wasn't struck as a proof, its brilliant and reflective finish has earned it a “Proof-Like” designation.

Though relatively small in total land, Israel is blessed with an abundance of beautiful, historic and Biblical sites. Thanks to the Bank of Israel’s “Views of Israel” series, you to travel to these storied lands. Secure one of these historic coins for your own collection now before they disappear!