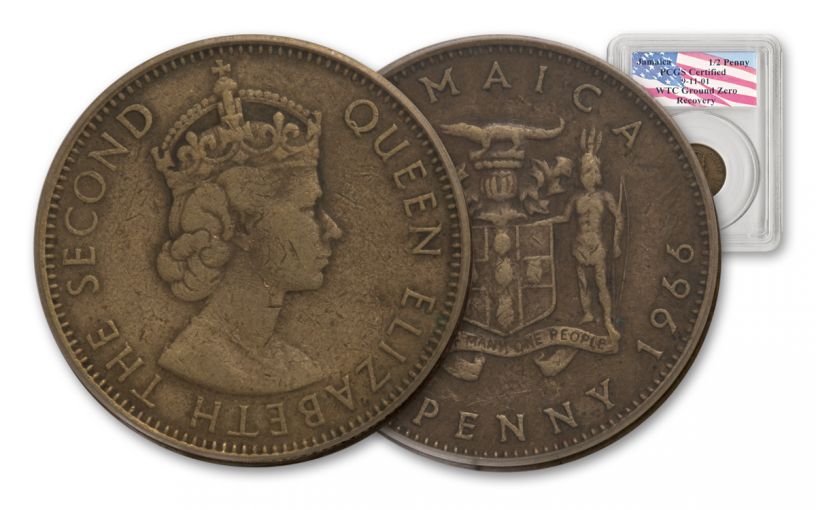 Availability: In Stock
This item will ship within 2 business days.
Item #
355024
Add to Wish List Add to Wish List Wishlist is for registered customers. Please login or create an account to continue. Add to Compare

If you had the chance to own a coin that went down with the USS Arizona on December 7, 1941 during the Japanese attack on at Pearl Harbor, would you take it? For the same reasons you would probably want to own such an important artifact, you’d also want to own a coin recovered from the wreckage of the World Trade Center buildings that were brought down on September 11, 2001 by terrorists who flew hijacked planes into the iconic “Twin Towers” in New York City.

Now you don’t have to imagine it. Thanks to an incredible opportunity that we were granted, you can actually own a coin that was recovered from Ground Zero at the World Trade Center site! These coins are Jamaica Half-Pennies that were stored in the vaults in the COMEX depository. When the vaults were finally found, an army of federal agents and armed guards surrounded the recovered coins and a small convoy of armored cars transported them to a secret location for safekeeping.

These coins were struck between 1950-1969 and have been certified and pedigreed by the Professional Coin Grading Service (PCGS) as World Trade Center (WTC) Ground Zero Recovery coins. Each has been sonically sealed in an acrylic capsule and bears an exclusive pedigreed label.

These coins are true pieces of history that miraculously survived the horrendous attack on America. Through these coins you’ll be able to preserve and pass on to future generations a critical moment in our nation’s history so that they will never forget what happened – and to make sure it never happens again! Think about it, you will ALWAYS remember where you were and what you were doing when the World Trade Center Towers collapsed on that fateful day.

These are the most affordable of the coins recovered from the World Trade Center. Mark one of the most important days in modern U.S. history and secure yours today. Date varies.