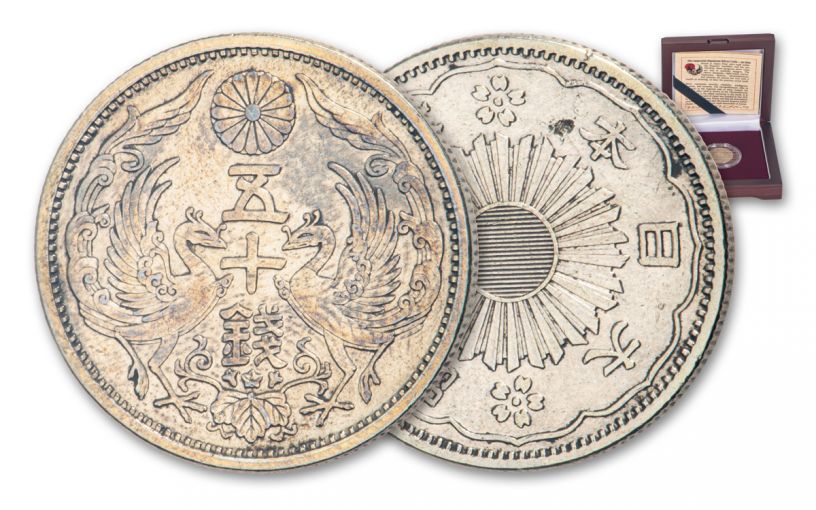 Availability: In Stock
This item will ship within 2 business days.
Item #
350932
Add to Wish List Add to Wish List Wishlist is for registered customers. Please login or create an account to continue. Add to Compare
Recommended Products
Product Description

Traditionally, Japanese coins can be tough to acquire outside of Japan – and they’re getting even more difficult to find these days because they’re becoming increasingly popular with collectors all over the world. That’s why we’re so pleased to present this remarkable coin that dates back to Imperial Japan form the 1920s and ’30s.

These coins are 50 Sen silver coins that were struck in Japan from 1922 to 1938 – years when the Japanese Empire was ruled by Emperor Yoshihito and his son, Emperor Hirohito. That second name should be particularly familiar, as Hirohito’ reign overlapped a period in Japanese history when the nation’s military leaders were becoming more influential within the government. Thanks to the unchecked aspiration of his generals, Hirohito became responsible for leading his country into World War II where it suffered a humiliating defeat at the hands of the United States and its allies.

Despite the aggressive and warlike era from which these coins came from, the 50 Sen piece is actually decorated with peaceful symbols. The cherry blossoms on the obverse are held in high regard in Japanese culture and their annual spring bloom is seen as a manifestation of innocence, simplicity and rebirth. The pair of mythological phoenix birds depicted on the coin’s reverse was meant to symbolize a period of peace and prosperity.

Fifty-Sen coins were issued in Japan from 1870 until 1948 and they remained in circulation until the early 1950s when the coin was demonetized after Japan adopted a single currency unit. At 23.5 mm in diameter, your 1922-1938 Japan Silver 50 Sen is about the size of a quarter and was worth half a Japanese Yen. Each was struck in 4.95 grams of 72% silver and will come beautifully displayed in a custom wooden presentation case with a detailed storycard. Date will vary.