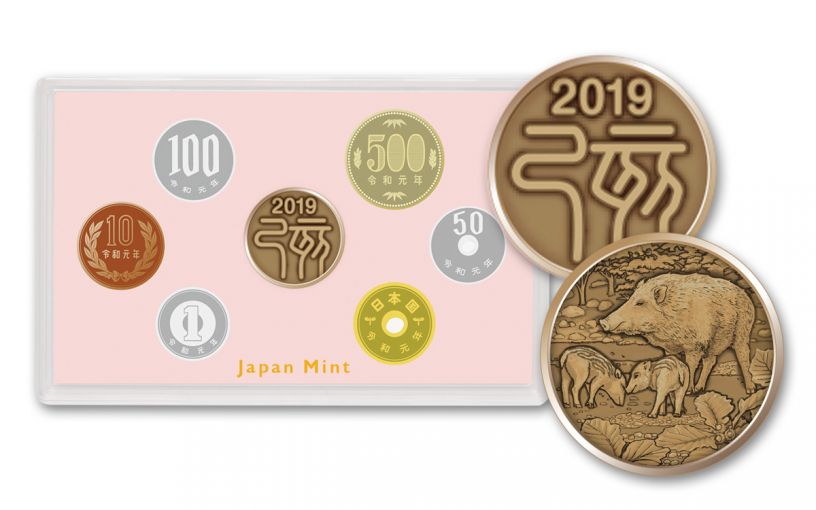 Availability: Out of Stock
This item is currently Out of Stock. Please sign up to be notified if this product becomes available.
Item #
354055
Add to Wish List Add to Wish List Wishlist is for registered customers. Please login or create an account to continue. Add to Compare

The Era of Reiwa Has Begun

On May 1, 2019, a new era began in Japan. Emperor Akihito, 125th emperor of Japan, had abdicated the Chrysanthemum Throne the day prior, marking the end of the Heisei era. His son Naruhito then ascended to the throne, beginning the era of Reiwa.

A new emperor also meant a new Mint Set would be needed from the Japan Mint, as the coins include a reference to the current emperor. This seven-piece set, then, is actually the second Mint Set to be issued for 2019 – a rarity that increases its already coveted status among Japanese collectors.

This set brings together one of each circulating coin issued in Japan along with a special one-year-only red brass medal featuring this year’s Oriental Zodiac animal, the Boar. Much like the U.S. Mint, the Japan Mint also issues spectacular Mint Sets each year. In addition to the special red-brass Year of the Boar medal, this set includes one of each circulating coin issued by Japan – the 500-Yen, 100-Yen, 50-Yen, 10-Yen, 5-Yen and 1-Yen coins.

These legal-tender coins will come in original Brilliant Uncirculated (BU) condition as fresh and crisp as the day they left the mint. Each set will also come in its original mint packaging.

This set already typically sells out each year, and only a fraction of the mintage is allotted for overseas markets. Don’t miss this historic “first” Japan Mint Set – the first of a new era issued under a new emperor. Hurry and secure yours now.

These coins reference the new Emperor – a complete second Mint Set for 2019! Don’t miss out on this “first-year-of-issue” variety!