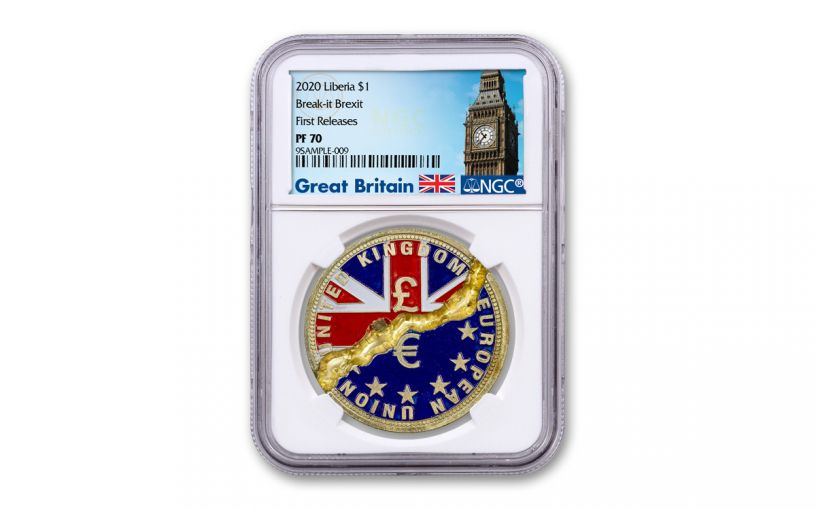 Availability: Pre-Order
This item will ship 05/29/20
Item #
358739
Add to Wish List Add to Wish List Wishlist is for registered customers. Please login or create an account to continue. Add to Compare

Break Off A Piece of Brexit History

More than three-and-a-half years after voters narrowly approved a referendum calling for the United Kingdom to leave the European Union, “Brexit” finally arrived on January 31, 2020, ending a “marriage” between Great Britain and its European trading partners that been in place since 1975. Though myriad details still needed to be hammered out, is was a huge victory for British Prime Minister Boris Johnson and his Conservative Party.

To mark this historic occasion – one that will undoubtedly have ramifications around the world – the Republic of Liberia released this ingenious coin that not only pays tribute to the monumental event but offers collectors a chance to make their own “break” with traditional coin conventions. Struck in beautiful golden-hued brass, the 2020 Liberia Break-It Brexit Coin features a colorized design that depicts Great Britain’s flag on one half and the European Union Flag on the other along a crooked perforated line that allows the coin to be broken in half! On one side of the break you will see the British £ Pound sign and on the other you’ll see the € Euro sign – both ripped from today’s headlines and struck on this fantastic coin!

While we recommend keeping the coin intact, it’s up to you whether to break it or not!

In addition, your 2020 Liberia Silver Break-It Brexit coin will come in gorgeous proof condition, meaning it was expertly crafted by the mint from hand-selected planchets, polished dies and multiple strikes to produce beautifully frosted details rising over mirror-like fields. In fact, each coin available in this offering has been graded by the Numismatic Guaranty Corporation (NGC) as being in flawless Proof-70 (PF70) condition, a distinction that means your perfectly-graded coin will have ZERO imperfections – showing all features and fields exactly as the engraver and mint intended.

In addition, NGC has certified this proof to be a First Releases (FR) coin, a designation that means it was received by NGC or an NGC-approved depository within the first 30 days of its release. Collectors seek out these coins because they are produced with new dies and considered to have sharper strikes and deeper mirrors than those that are struck later. It will also come sonically sealed in an acrylic holder with an exclusive Big Ben label.

Just 10,000 of the historic coins will be released for the entire world. With so few available you don’t want to get caught napping – reserve one to your cart today!

Mark the UK’s break from the European Union with the 2020 Liberia Break-It Brexit Coin. Order yours today before other collectors make short work of our limited supply.