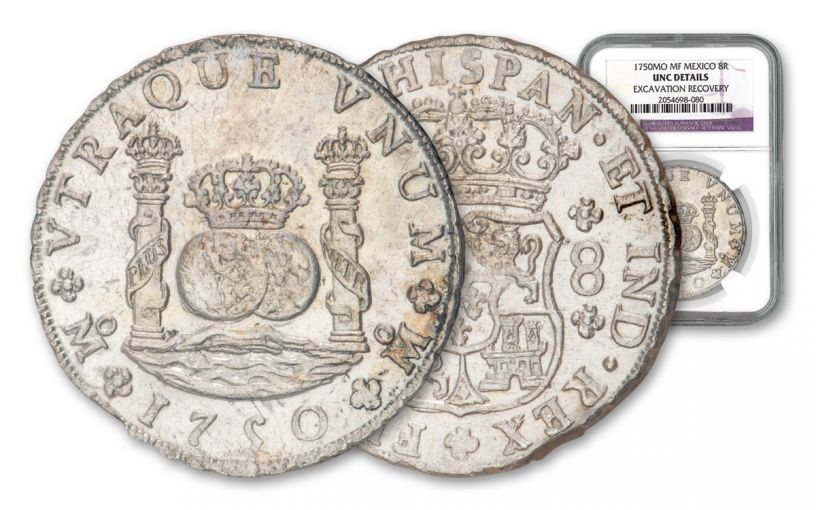 Availability: Out of Stock
This item is currently Out of Stock. Please sign up to be notified if this product becomes available.
Item #
357173
Add to Wish List Add to Wish List Wishlist is for registered customers. Please login or create an account to continue. Add to Compare

The Pillar 8 Reales — the famous Piece of Eight — was America’s first Silver Dollar, officially recognized as legal tender by the Second Continental Congress prior to the creation of our own circulating currency. These were among the first coins that traded hands in the American colonies and were the forerunner of our own United States Silver Dollars.

Recently, a hoard hidden for more than 260 years was discovered in a wall or ground (the exact location cannot be confirmed). Dated between 1750 and 1755, these coins pre-date the American Revolutionary War by as much as 20 years and come from both Mexico and Peru. But why were they hidden away? Some have speculated that they were hidden due to the French and Indian War, which began in 1754. Were they buried and hidden away from the enemy so soldiers in this war could be paid? Were they stolen from a ship heading back to Spain by a band of nefarious pirates? Perhaps it was someone just being particularly cautious with their money. Let your mind explore the possibilities!

Though these coins are more than 260 years old, they are well preserved, earning an “Uncirculated Details” grade from the Numismatic Guaranty Corporation (NGC). This is very impressive since Pillar 8 Reales circulated heavily and those that can still be found today are often well worn. Very few of “America’s First Silver Dollars” have survived in Uncirculated condition.

Now you can secure a 1750-dated struck in Mexico certified by NGC as Uncirculated condition and pedigreed as “Excavation Recovery.” Only a handful of coins are available. If you don’t jump on this opportunity now, it may be gone forever. Secure yours today!

GENUINE ARTIFACTS FROM EARLY COLONIAL AMERICA – This coin was struck in 1750 during the early days of Colonial America including the French & Indian Wars and the Revolutionary War.

STRUCK IN FINE SPANISH SILVER – Each Silver Pillar 8 Reales coin was struck in 27 grams of fine silver and measures 38.1 mm in diameter.

GRADED IN UNCIRCULATED CONDITION – Your Silver Pillar 8 Reales coin has been graded by the Numismatic Guaranty Corporation (NGC) in Uncirculated Details condition with an exclusive “Excavation Recovery” pedigree.

Here’s your chance to own a genuine Silver 8 Reales Pillar Dollar that witnessed America’s independence. Secure yours by clicking one to your cart right now!