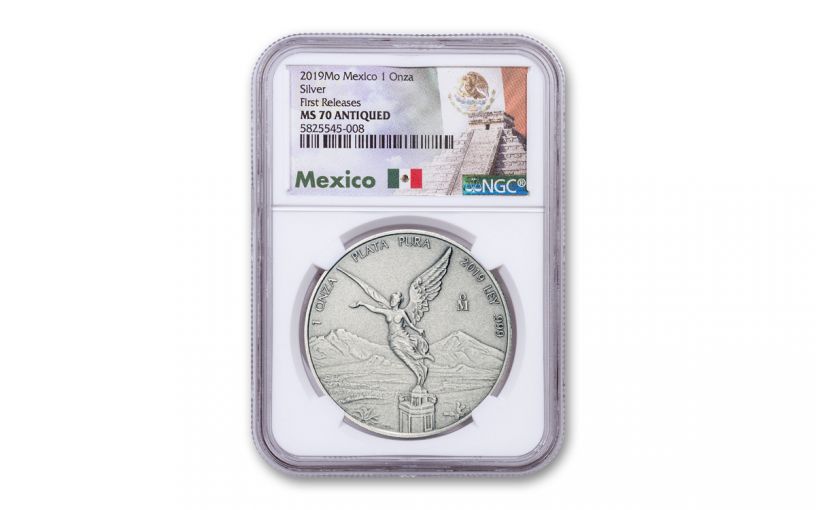 Availability: Out of Stock
This item is currently Out of Stock. Please sign up to be notified if this product becomes available.
Item #
354989
Add to Wish List Add to Wish List Wishlist is for registered customers. Please login or create an account to continue. Add to Compare

As the largest silver producer in the Western Hemisphere, Mexico has struck enormous quantities of silver coins since it was founded in 1535. In 2018, the Mexican Mint added a new twist to its already enormously popular Silver Libertad series with the addition of a one-ounce coin that featured a special antiqued finish. Giving the Libertad the appearance of coin that was struck centuries ago. It was the first time in the history of the series that this special finish has been applied!

The Mint released these special antique-finish Libertads again in 2019 but in MUCH smaller numbers. While 40,000 of the first-year-of-issue antiqued one-ounce Silver Libertads were struck, just 1,000 were coined in 2019 – that’s just 2.5% of the previous year’s mintage! Not only does that make the 2019 version of these coins incredibly scare, it also means that thousands of people who purchased the coin in 2018 won’t even get the chance to obtain the 2019 edition!

Struck in a full ounce of highly-pure 99.9% silver, the coin’s design features the familiar image of Winged Victory and the legendary volcanoes of Popocatepetl and Iztaccíhuatl on the reverse, and the National Coat of Arms surrounded by the different official seals used throughout the history of Mexico on the obverse. While bearing no denomination, the coin is backed by the Bank of Mexico with the government guaranty of the coin's weight and metal purity stamped right into its surface, making it a true silver bullion coin.

Your Antiqued One-Ounce Silver Libertad has been graded by the Numismatic Guaranty Corporation (NGC) as being in flawless Mint State-70 (MS70) condition, a distinction that means your perfectly-graded coin will have ZERO imperfections – showing all features and fields exactly as the engraver and mint intended. In addition, NGC has certified that your Silver Libertad is a First Releases (FR) coin, a designation that means it was received by NGC or an NGC-approved depository within the first 30 days of its release. It will also come sonically sealed in an acrylic holder with an exclusive Mexico-themed label.

Though the Mexican Mint has issued Silver Libertad coins in a wide range of denominations and sizes, the one-ounce version has always been the most heavily demanded. Now you can secure this coin with a special antiqued finish – but only if you act fast. With such a small mintage, these coins could disappear before you know it!

Act now to get the low-mintage 2019 One-Ounce Silver Libertad with a special antiqued finish. Click one to your cart before they’re all gone!