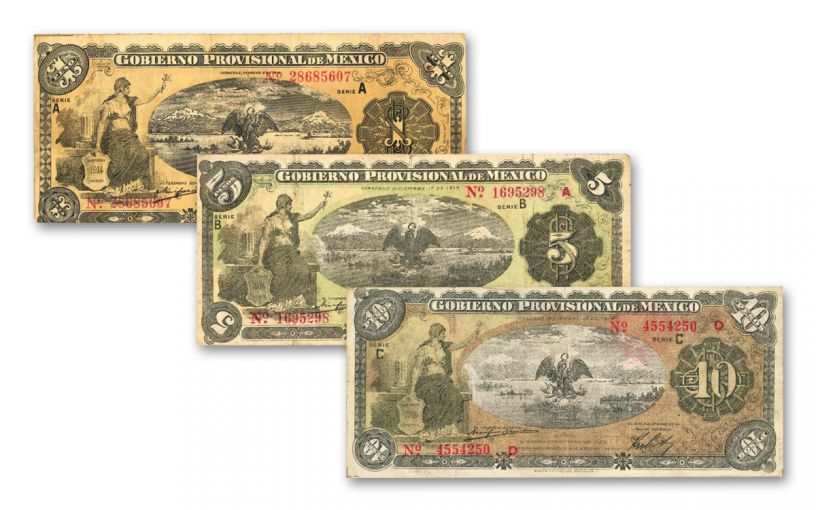 Availability: Out of Stock
This item is currently Out of Stock. Please sign up to be notified if this product becomes available.
Item #
354773
Add to Wish List Add to Wish List Wishlist is for registered customers. Please login or create an account to continue. Add to Compare

If history has taught us anything, it’s that one of the best ways to secure control of an area is through its money! The Mexican folk hero Francisco “Pancho” Villa knew this as well, which is why the “Robin Hood of Mexico” issued his own coins and currency as he protected peasants and battled corrupt officials during the Mexican Revolution.

This three-piece set of Revolutionary paper currency issued between 1914 and 1915 includes a 1 Peso, a 5 Pesos and a 10 Pesos note – each given its own bright color. The obverse displays a Seated Liberty at left, and an eagle and snake in the center with Mexico’s famous volcanoes Popocatépetl & Iztaccíhuatl in the background. The reverse features a Cap and Ray coin in the center. A trio of fascinating pieces of numismatic history! Each note comes in nice Very Fine (VF) condition perfect for display in your collection.

These notes are also important pieces of American and Mexican history from an era during which one of America’s most famous generals gained his first combat experience. Angered by a deadly 1916 raid by Pancho Villa into New Mexico, President Woodrow Wilson ordered American troops to cross the border and either capture or kill the legendary bandit leader. Despite locating and defeating Pancho Villa’s forces, the wily revolutionary managed to escape. During the campaign a young Lieutenant named George S. Patton served as aide-de-camp to the mission’s commander, General John J. Pershing. It was during the mission that Patton participated in the first motorized attack in the history of American warfare.

Pancho Villa funded his military campaigns by either stealing goods from corrupt wealthy landowners or by printing his own currency and enforcing its use among merchants at the point of a gun barrel. Now you can own a trio of these famous notes from the height of Villa’s career – and you don’t even have to engage in gunplay to do it!