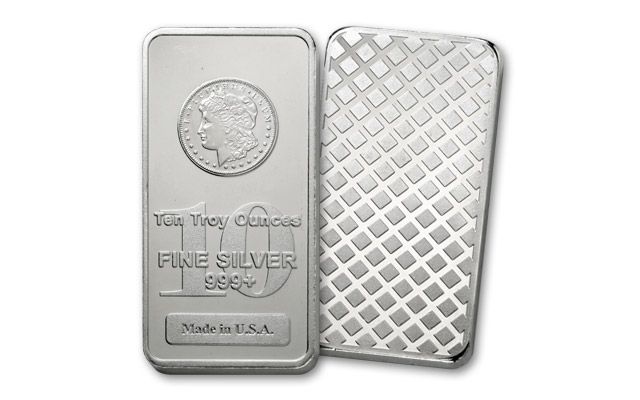 Availability: In Stock
This item will ship within 2 business days.
Item #
260400

When travelers approached the mountains around Virginia City, Nevada in the 1850s, they reported that the hills shone in the sunlight like a mirror. A few years later, the reason was discovered. Tiny flecks of silver covering the mountains were actually shining like tiny mirrors in the sun! Americans have been in love with silver ever since. Now, you can own a hefty bar of silver containing ten Troy ounces of 99.9% silver. In addition to being a huge amount of silver, the collectible Morgan Dollar image adds interest and makes it even more desirable!

The value of silver has skyrocketed nearly ten times in the last ten years, but it still remains an affordable and red-hot precious metal for millions of collectors worldwide. With the future uncertain, these silver Morgan Silver Dollar ingots are a convenient way for you to stock up on the precious metal.

Folks have been clamoring for them, and we negotiated a deal to bring them to you. Don't miss the opportunity!