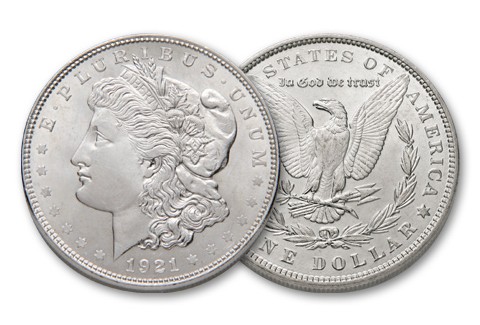 What's the most popular coin in America? The Morgan Silver Dollar! Why do collectors love them so much? Well, first of all they're big. And they're silver—nearly an ounce of the precious metal. The classic design of the Morgan Silver Dollar harkens back to the Old West, when silver miners dug deep into mountainsides to get the silver used to make them. The variety of Morgans is impressive as well. They were struck at five different mints, and you can collect them by date, mint or condition - or you can just accumulate them.
Want to buy Morgan Silver Dollars?
You’ve found our info page on Morgan Silver Dollars. To browse our inventory, please click here.

The History of the Morgan Silver Dollar

The Early Years
In America's early years, the colonists used whatever coins they could find in circulation. As most of the settlers came from Europe, it was not surprising that English, Dutch, French, and German coins were commonly seen. However, the best-known and most widely used coin among the citizens turned out to be the Spanish Silver Dollar from the Mexico City Mint.

Then, in 1783, Thomas Jefferson proposed a unique coinage for the United States that was based on the Spanish Silver Dollar and divided into 100 cents. When Congress met on July 6, 1785, to adopt a standard monetary unit, Jefferson's suggestions were accepted.

To determine the amount of silver to put into the new United States Silver Dollar, Alexander Hamilton weighed a group of Spanish Silver Dollars. According to legend, he used circulated coins that had been worn down and lost some of their silver content. Thus, the weight of a newly-minted U.S. Silver Dollar was set at the weight of a worndown Spanish one - 26.96 grams versus the Spanish 27.07 grams.

Until the Mint Act of April 2, 1792, though, it was not possible for the United States to strike its own coinage. This Act was especially important in the history of the United States, because it established the U.S. Mint in Philadelphia and specified the Silver Dollar as the highest-denomination silver coin.

The first U.S. Silver Dollars were struck in 1794, but American merchants kept the heavier and more valuable Spanish coins for themselves and exported the lighter U.S. coins to Europe for trade. As a result, U.S. coins disappeared almost as fast as they were minted. For this reason, Silver Dollar coinage was suspended in 1804.

In 1836, Congress re-established the Silver Dollar (with a slightly lighter weight of 26.73 grams), and by the 1840s, they were being issued for general circulation once again. Even at this time, most Americans rarely saw a Silver Dollar in circulation, because most were held in bank vaults, exported, or melted for their precious silver bullion. This situation led to the Act of 1873 which eliminated the Silver Dollar from regular U.S. coinage altogether.

It was incredibly difficult to mine gold in this region because of "that infernal blue stuff," a rich blue clay that impeded mining efforts. Savvy miners reasoned there had to be a reason why the clay was blue, so they took samples to San Francisco for testing. The results showed that this clay contained some of the purist silver ever found.

At first, only a scant few knew about the clay. They vowed to keep it a secret. True to human nature, this did not occur. Within days, tens of thousands of miners were flocking to the area, and everyone was staking a claim.

Even Samuel Clemens, aka Mark Twain, said he staked a claim. His story is that he and three partners spent six months in a cabin drinking, playing cards, digging and panning. They found a rich vein of silver and he spent ten days dreaming of what it would be like being a multi-millionaire. At that time, work on a new claim needed to start within 10 days. During that time he was called away to visit a sick friend. He thought the partners were working at the strike, but that was not the case. In the end, someone else had staked claim to their find.

The Coinage Act of 1873
At the time of the Coinage Act of 1873, silver values were decreasing. Many factors - including the massive Comstock Lode and a flood of German silver into the market - contributed to this devaluation. This bill was passed in congress and the production of silver coinage in the U.S. ceased. This was done because of the large difference in value between gold and silver.

Bland-Allison Act
The Bland-Allison Act was written by Representative Richard P. Bland with amendments made to it by Senator William B. Allison. It was passed in Congress in February of 1878. This act restored silver as legal-tender. It also included verbiage stating that the government would mint 2 million silver dollars per month.

Almost Half the Mintage Melted
Morgan Silver Dollars were minted continuously from 1878 until 1904. By the early 1900s the Comstock Lode was exhausted and the silver bullion supply ran out. As far as Morgan and the rest of the nation was concerned, the era of the Silver Dollar had come to an end. By this time, most Americans preferred to use paper money instead of carrying around heavy Silver Dollars. In fact, Silver Dollars circulated widely only in the sparsely-populated West, but in the rest of the country they were stockpiled in banks and U.S. Treasury Department vaults.

In 1918, Congress passed the Pittman Act to replenish the government's reserves of silver bullion by officially melting millions of the Morgan Silver Dollars stored in Treasury vaults. As a result, over 270,000,000 Morgan Silver Dollars were melted - almost half the entire mintage from 1878-1904.

The Pittman Act also required the government to purchase more silver to replace the melted coins, so the Morgan Silver Dollar was briefly revived one more time in 1921 until it was replaced later in the year with the Peace Silver Dollar.

The government's demand for the Morgan Silver Dollar in its own time can be judged by the fact that it is the only non-gold U.S. coin to be struck at five different Mints - Philadelphia, San Francisco, Carson City, New Orleans, and Denver.

The Englishman Who Designed America's Most Popular Coin
When he arrived in the United States from England in October 1876, George T. Morgan was already an established and respected engraver who possessed the rare skill of creating beauty with his simple engraver's tools.

Born in 1845, Morgan attended the Birmingham Art School before winning a scholarship to the prestigious South Kensington Art School in London. After running his own engraving business in London, he became an Engraver at England's Royal Mint. There, he continued to learn under the watchful eye of the legendary English engraver, Leonard Charles Wyon.

In mid-1876, Morgan's career took an unexpected turn. The Deputy Master of the Royal Mint received a letter from the Director of the U.S. Mint in Philadelphia, H.R. Linderman, asking if he knew of someone who could fill the position of Assistant Engraver of the U.S. Mint. The Royal Mint recommended Morgan - and after examining samples of Morgan's work, Linderman offered him the post of "Special Engraver" for $8 per day.

Upon his arrival at the U.S. Mint in Pennsylvania, Morgan was assigned the task of designing the Silver Dollar and working on patterns for the Half Dollar. At this time, the U.S. Mint struck no circulating Silver Dollars, but the Mint realized it was only a matter of time before a Silver Dollar would be called for once again. They wanted to be ready when the time came.

For one of his Half Dollar patterns in 1877, Morgan used Philadelphia school teacher Anna Williams as a model for Lady Liberty because of her "nearly perfect Grecian profile." Following the passage of the Bland-Allison Act on February 28, 1878, Morgan enlarged this pattern to Silver Dollar size, and this was the design eventually used for the Silver Dollars authorized in the Act - the Morgan Silver Dollar.

By the time he eventually retired in 1924, George T. Morgan had worked at the U.S. Mint for an amazing 48 years. During this time, the United States went through many changes as the "Age of Technology" became a reality. This was also one of the most exciting and turbulent periods in United States history, and Morgan was witness to dramatic changes taking place all around him - from the winning of the West to World War I, and from the Wright Brothers' flight to Babe Ruth taking the baseball world by storm. Through it all, the one constant factor was the Morgan Silver Dollar, which even then was respected for its beauty and silver heft.

Morgan Silver Dollar Collections are Increasingly Hard to Assemble
For generations, one of the greatest goals among collectors has been to amass a complete collection of Morgan Silver Dollars. The incredible number of coins melted as a result of the Pittman Act has made this task a real challenge, because many of the rarer branch mint and year-date issues were destroyed along with the more popular coins.

To make matters worse, the Wartime Silver Act of 1942 caused even more coins to be melted… and untold millions of additional coins were melted when the price of silver shot up to over $50 per ounce in 1979 – 80.

No one knows for sure how many historic Morgan Silver Dollars still remain today, but it is known beyond a doubt that they are one of the most popular and widely collected American coins in the world. Many collectors own a few coins as examples of the series, but only a select few can ever hope to accomplish the rare feat of assembling a complete collection of Morgans from every year that they were struck.

Obverse:
Lady Liberty is portrayed as a goddess, wearing a Liberty Cap with the word "Liberty" inscribed on a ribbon. The cap is also adorned by two cotton blossoms and two heads of wheat, which are symbolic of America's agricultural heritage. Thirteen stars represent the original 13 colonies. George T. Morgan's small initial "M" is featured at the base of Liberty's neck. The motto "E Pluribus Unum" and the date complete the design.

Reverse:
The central design is an American eagle with outstretched wings. It holds an olive branch of peace and the arrows of war in its talons to indicate that although America is a peace-loving nation, she will defend her borders against attack. The motto "In God We Trust" in Gothic script appears above the eagle, while a laurel wreath surrounds the lower half of the design. The mint mark of coins struck at the branch mints appears below the bow in the wreath. Finally, with the help of a magnifying glass, it is possible to read Morgan's tiny initial "M" on the left loop of the ribbon tying the wreath.
Location of the mint mark on Morgan Silver Dollars struck at the branches of the United States Mint.
CC = Carson City, O = New Orleans, S = San Francisco, D = Denver, No Mint Mark = Philadelphia.

Mint Marks and Hoards
There were 657 million Morgans produced between the years of 1878 and 1921. They were minted in Philadelphia (no mint mark), San Francisco (S), New Orleans (O), Carson City (CC) and Denver (D). There are limited numbers of the Carson City coins because of the smaller mintages of coins from that branch mint.

The majority of Morgan Dollars found today can be linked to one of four major hoards. These hoards are known as the Treasury Hoard, the Redfield Hoard, the Continental Bank Hoard and the Casino Hoards. Morgans in these hoards were generally kept in bags, hence the "bag marks" you will find on Morgans today. Bag marks are caused from the coins coming into contact with each other.

In total, the number of coins that have survived to this day are small. One leading authentication service estimates that they have seen 1.4 million of these historic silver dollars. The actual number may be greater than this, but in comparison with the number minted, that figure is staggering.