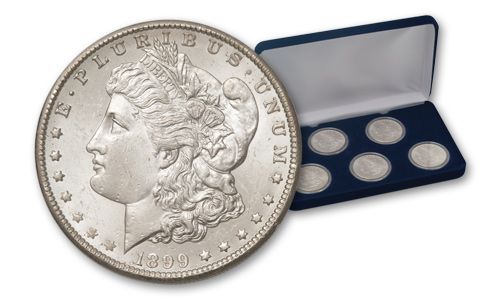 Availability: Available for Order
This item will ship 04/02/21
Item #
224199
CC Payments as low as
$247.50 / month
Add to Wish List Add to Wish List Wishlist is for registered customers. Please login or create an account to continue. Add to Compare

Follow The Outlaw Trail to a Fistful of Dollars

This 5-coin collection of Morgan Silver Dollars follows the trail of Butch Cassidy and the Sundance Kid through the years the outlaws wrecked havoc across the Old West. You get two Silver Morgans struck at the Philadelphia Mint: an 1896 and 1898. And you get three Morgans from the New Orleans Mint: an 1898, 1899 and a 1900. Morgan Silver Dollars are more popular today than they ever have been, due in some degree to the trail of outlaws like Butch and Sundance and their constant quest for these big silver coins over 100 years ago. Includes deluxe presentation case with a storybook and certificate of authenticity, plus a replica Butch Cassidy and the Sundance Kid wanted poster.