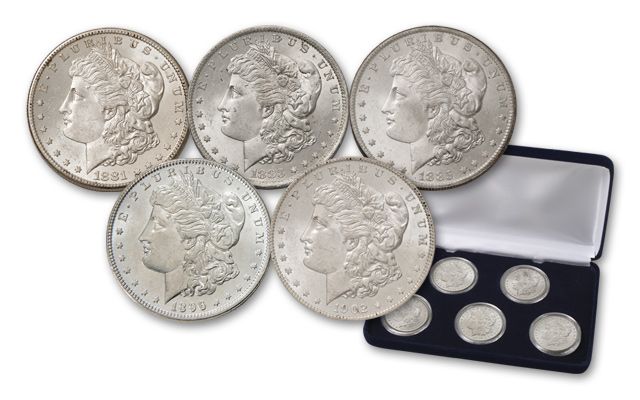 Availability: Out of Stock
This item is currently Out of Stock. Please sign up to be notified if this product becomes available.
Item #
243095
Add to Wish List Add to Wish List Wishlist is for registered customers. Please login or create an account to continue. Add to Compare

The greatest silver rush in United States history didn’t happen as the result of a strike in a remote mine shaft. It happened in Washington, D.C. right across the street from the White House. It was the release of the U.S. Treasury Hoard of Morgan Silver Dollars from 1961 to 1964. The hoard contained countless bags of previously scarce Morgan Silver Dollars. Collectors were delighted, and today, we’re pleased to offer a five coin collection of dates that were found in the hoard: 1881-S, 1883-O, 1885-O, 1896-P and 1902-O. All five Silver Dollars are in Brilliant Uncirculated (BU) condition. Each is sealed in a protective numismatic capsule and the set comes in a luxurious display case. It’s a great piece of U.S. history and a legacy of the fabulous Wild, Wild West. Don’t miss this chance to share it with your family!