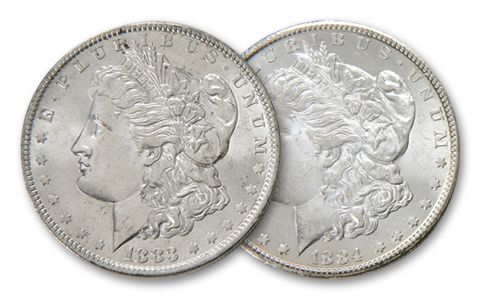 Availability: Out of Stock
Discontinued Product
Item #
228914
Add to Wish List Add to Wish List Wishlist is for registered customers. Please login or create an account to continue. Add to Compare

The Comstock Lode in Nevada was the greatest silver discovery in history. It was the reason the U.S. Mint first struck the famous Morgan Silver Dollar and also the reason it built a branch mint in nearby Carson City. To distinguish the coins struck there, Carson City Mint Morgans feature the legendary "CC" mint mark. Unfortunately, the Carson City Mint produced Morgans for just 13 years before the silver from the legendary lode began to trickle out and forced the government to close the mint. Today, "CC" Morgans are well-struck, high-quality coins usually offering excellent luster. Because of their historical significance, these somewhat scarce and hard-to-find coins are always sought after eagerly by collectors. The pair of coins available in this offer are 1883 and 1884 Carson City Mint Morgan Silver Dollars. They are fabulous specimens graded in Brilliant Uncirculated condition. Absolutely reeking of Wild West history, these coins were very popular on the frontier where their solid silver heft was much more accepted than paper money. For that reason, it can be very tough to find "CC" Morgans in the Mint-fresh condition that these coins are in. What's more, only 2% of all Morgans ever struck bear the "CC" mint mark. And to make matters worse, over the 120 years since these two "CC" Morgans were struck the U.S. government officially melted over half the entire Morgan mintage. Scarce? You bet, so order now!