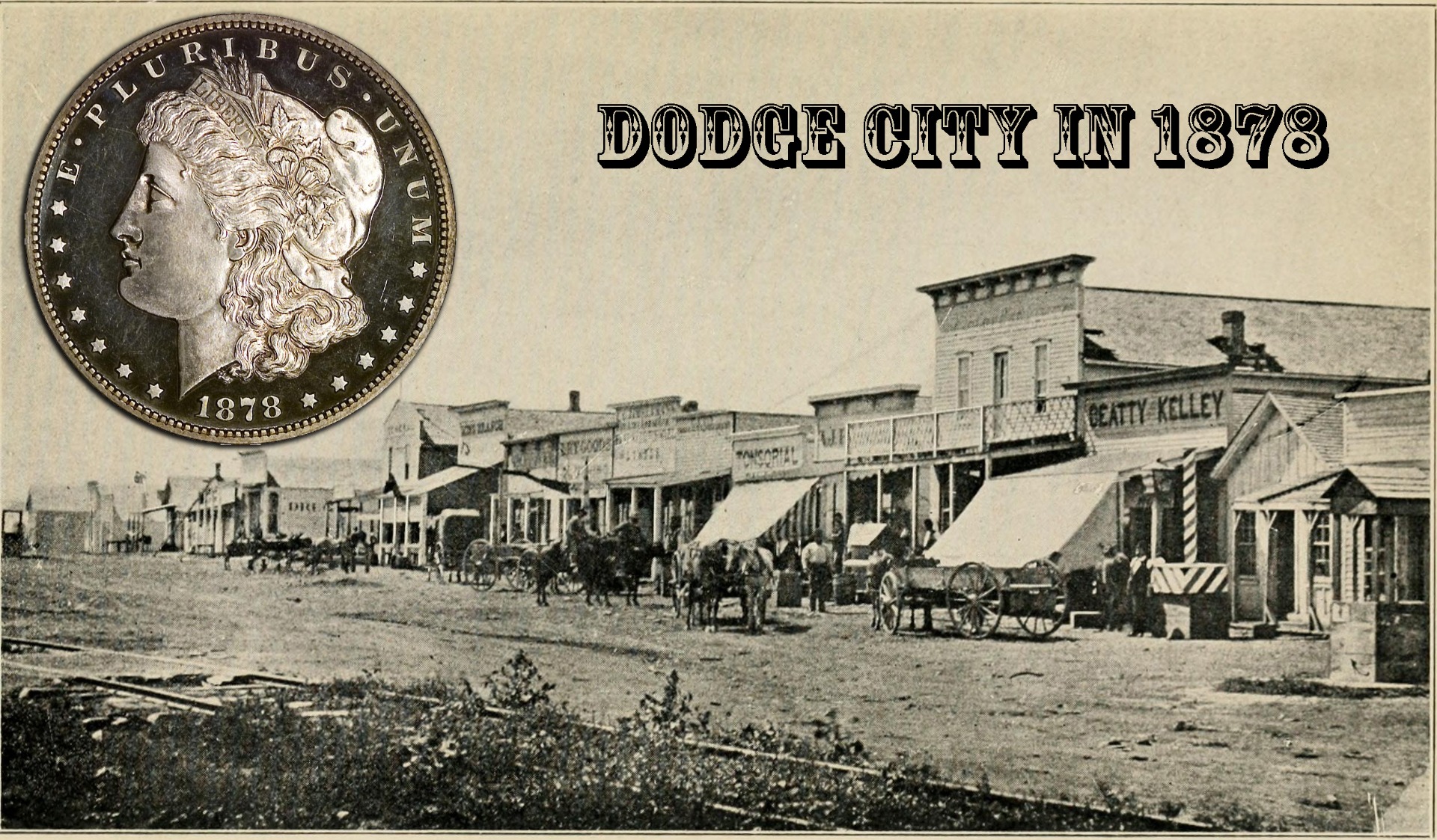 The Morgan Silver Dollar is America’s most collected coin, with a rich history that was born out of the old Wild West. These big, beautiful silver dollars conjure up images of cowboys and salon poker games, outlaws and stage coach robberies, casino slot machines and honkytonks of the past.  Born out of the rich silver mines of Nevada that turned small mining camps into large bustling cities full of promise and entrepreneurial enterprise. Today, Morgan Dollars are among the most colorful and treasured relics of the old American West. 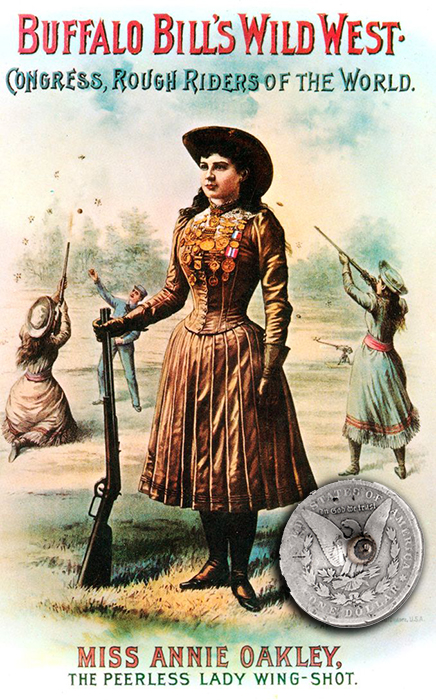 Morgan Dollars were considered large and bulky and not very popular in daily commerce.  They were mainly circulated in the South and in the Wild West. Cowboys on long cattle drives would drop these silver dollars into their canteens to hide them for security, but also found that the silver kept their water pure.

These were the coins that Jesse James and his gang stole in their holdups.  The silver dollars that Doc Holiday and Wyatt Earp throw across saloon tables in Tombstone, and the coins that Annie Oakley shot holes through in the Buffalo Bill Wild West Shows. The Morgan Silver Dollar is truly an inspirational coin of historical significance. 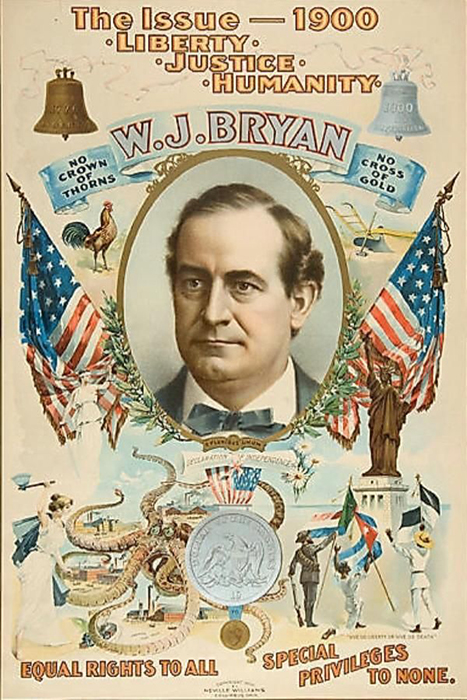 Minted from 1878 to 1904, and then once again in 1921, before retiring as America’s most popular coin. Morgan Dollars are called the "King of America's Coins" for a good reason, because they helped the United States grow the western frontier and fuel the engines of American industrialization. During the late 19th Century, the Morgan Dollar became a rallying point in politics between the Eastern Bankers, known as the “Goldbugs,” and the Western Silver Mining interests, dubbed the “Silverites.”  They contributed to America’s first major economic depression known as the Panic of 1893 and became a major political platform in the 1896 and 1900 Presidential elections. The “Gold” or Silver” bimetallism debate over the monetary standard gave the politicians much to argue about.

In the early 20th Century, the mass meltings of Morgan Dollars helped finance the First World War and then again in 1942 during World War II. Forged by fires of the U.S. Mint melting pots, to the rediscovery of a massive hidden hoard found in the Treasury vaults in the 1960’s, the Morgan Dollar is one of the most complex and misunderstood coins issued by the United States. 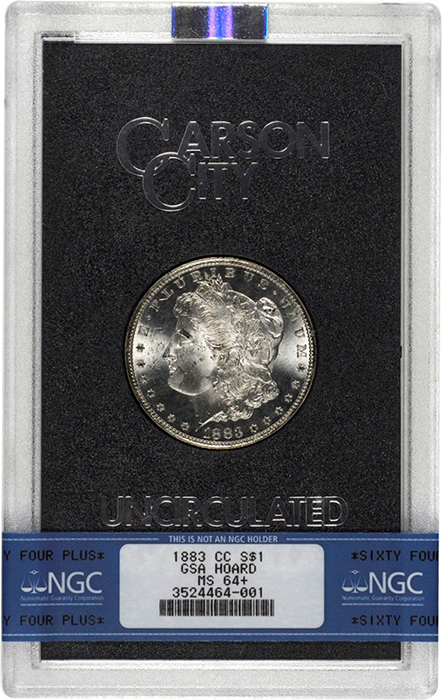 Over the years, many Morgan Dollars ended up hidden away in Treasury vaults, forgotten for many decades, and a large majority ended up in melting pots due to the Pittman Act in 1918 and other legislation.  Fortunately, a massive hoard of Morgan Dollars were discovered during an audit of the Treasury vaults in the 1960’s. Shortly after, the Treasury Department drastically reduced the silver content in the nation’s coinage, making Morgan Silver Dollars very desirable.

The Treasury Department released many millions of Morgan Dollars in the GSA sales of the 1970’s, creating a buying frenzy with the public who was looking to capitalize on the devaluated dollar. This created an explosion in the demand of this once very unpopular coin and lifted its status into America’s favorite collectible coin.

The Morgan Dollar is a coin of contradictions... From leading the country into financial ruin at the end of the 19th Century, to saving the day in the beginning of the 20th Century, and then back into the limelight in the 1960’s when the silver content was taken out of America’s coinage and massive hoards were made available for sale to the public.  It’s no surprise that the Morgan Dollar is an American classic coin that has become the most popular and collected coin in history.

Below is a brief overview of the major events that affected Morgan Silver Dollars.

1859 - Comstock Lode; The richest silver mine in American history was discovered in Nevada.

1918 - The Pittman Act; The mass melting of over 270 million Morgans are used to supplement the war effort. 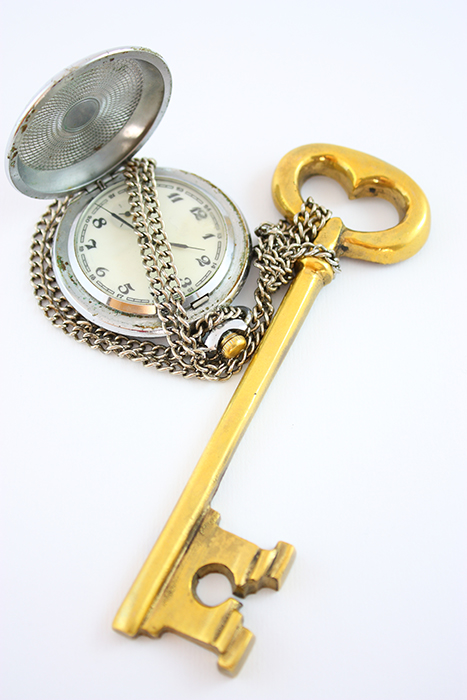 Collecting Morgan Dollars has become a popular set-building pursuit among many coin enthusiasts. The goal is to complete, or nearly complete a set of Morgan Silver Dollars by date or mintmark. The most desired coins in sets are known as “Key Dates.” “Key Date” Morgan Dollars are usually the most valuable in the series, often the rarest and hardest to find.  Often known as “Keys,” they tend to have higher price appreciation over time than their common-date counterparts. There are also “Semi-Key Dates” or simply “Semi-Keys” that are the next level of difficult-to-obtain coins after “Keys.” Both “Keys” and “Semi-Key Dates” will maintain higher value than common dates.

Supply and demand moves all markets, and with the Morgan Dollar, rarity and demand drives pricing.  A coin’s population drives supply, so when there are high supplies, prices are usually lower when readily available. However, when a Morgan is difficult to obtain and in demand, like a Key Date, it will have a numismatic premium based on the rarity and condition. 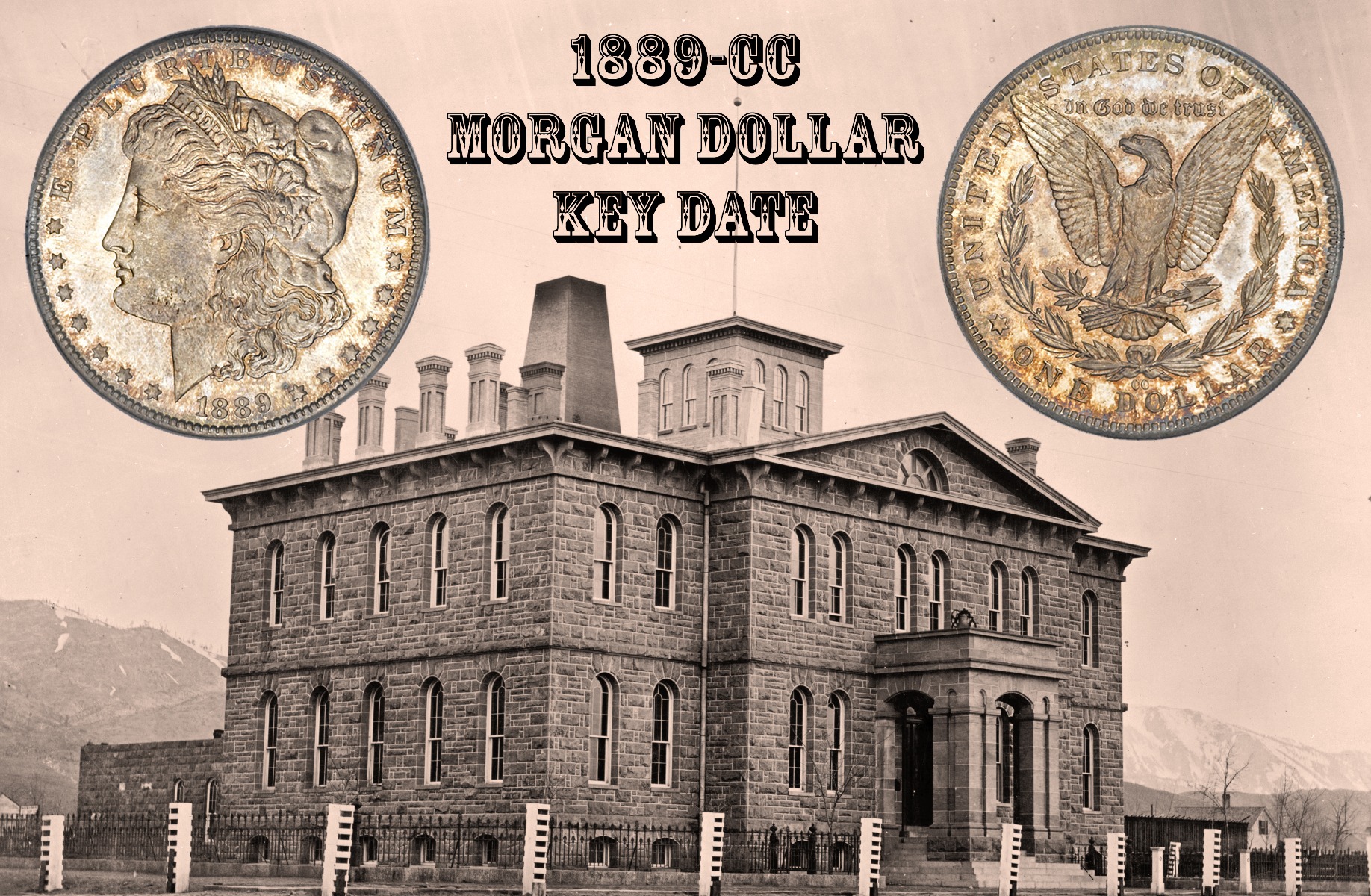 The 1889-CC Morgan Dollar is a Key Date coin that has a limited supply with increasing demand. The Carson City Mint started minting Morgan Dollars in 1878, but went on a 4-year hiatus in 1885 due to political reasons. In October 1889, Morgan Dollars once again began rolling off the mint’s presses, but only 350,000 coins were struck in the last three months of that year due to maintenance issues. The result is that the 1889-CC Morgan Dollar is one of the lower mintage issues of the entire Morgan series. Many other less-famous dates had lower mintages, but many 1889-CC Silver Dollars had an early demise. Approximately 300,000 1889-CC Silver Dollars were melted, ensuring 1889-CC survivors as one of the Key Dates in the Morgan Dollars series. 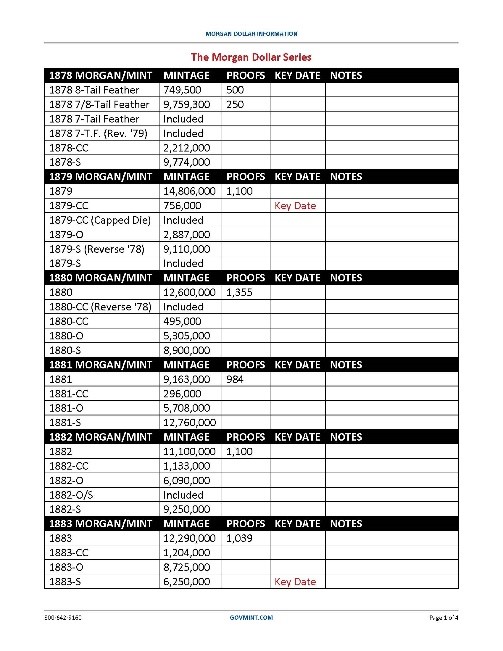 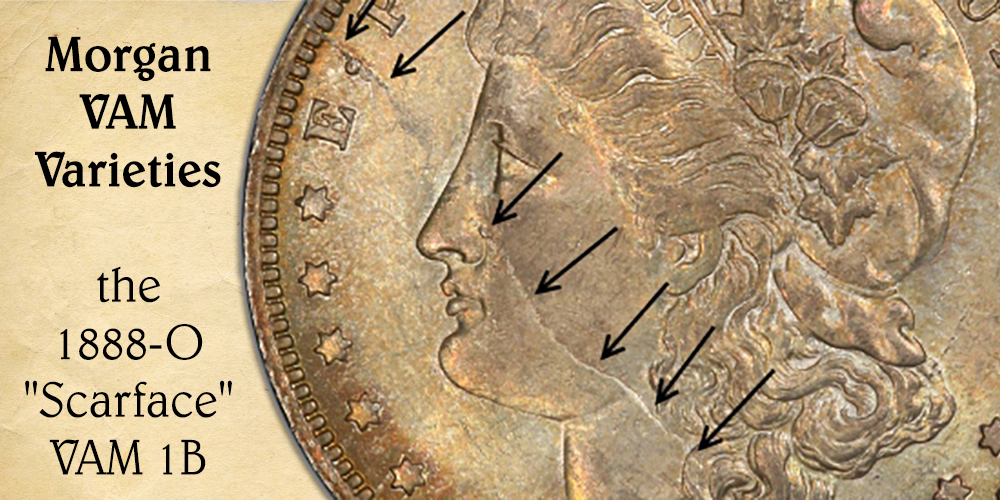 Almost 50 years ago, extensive research was published by Leroy C. Van Allen and A. George Mallis on the variation of the dies used to strike Silver Dollars. The term VAM is an acronym for “Van Allen-Mallis”. In 1971, Leroy Van Allen and A. George Mallis published “The Comprehensive Catalog and Encyclopedia of Morgan and Peace Dollars,” which is one of the foremost authorities on these coins. There are over 3,000 different VAM numbers and since the VAM book was first published and it has been updated with new editions and supplements to reflect the latest research findings.

The VAM system catalogs identified die varieties by their respective date and mintmark and these VAM numbers are exclusive for each specific Morgan variety. Some VAM varieties have fun nicknames like, Long Nock, Alligator Eye, Spitting Eagle, Hot Lips and Scarface. There are also popular variety lists like the ‘Hot 50’ or ‘Top 100’ varieties. VAM collecting is very popular, and it’s the "thrill of the hunt," that drives many coin collectors on their journey in collecting as many different die varieties as possible. 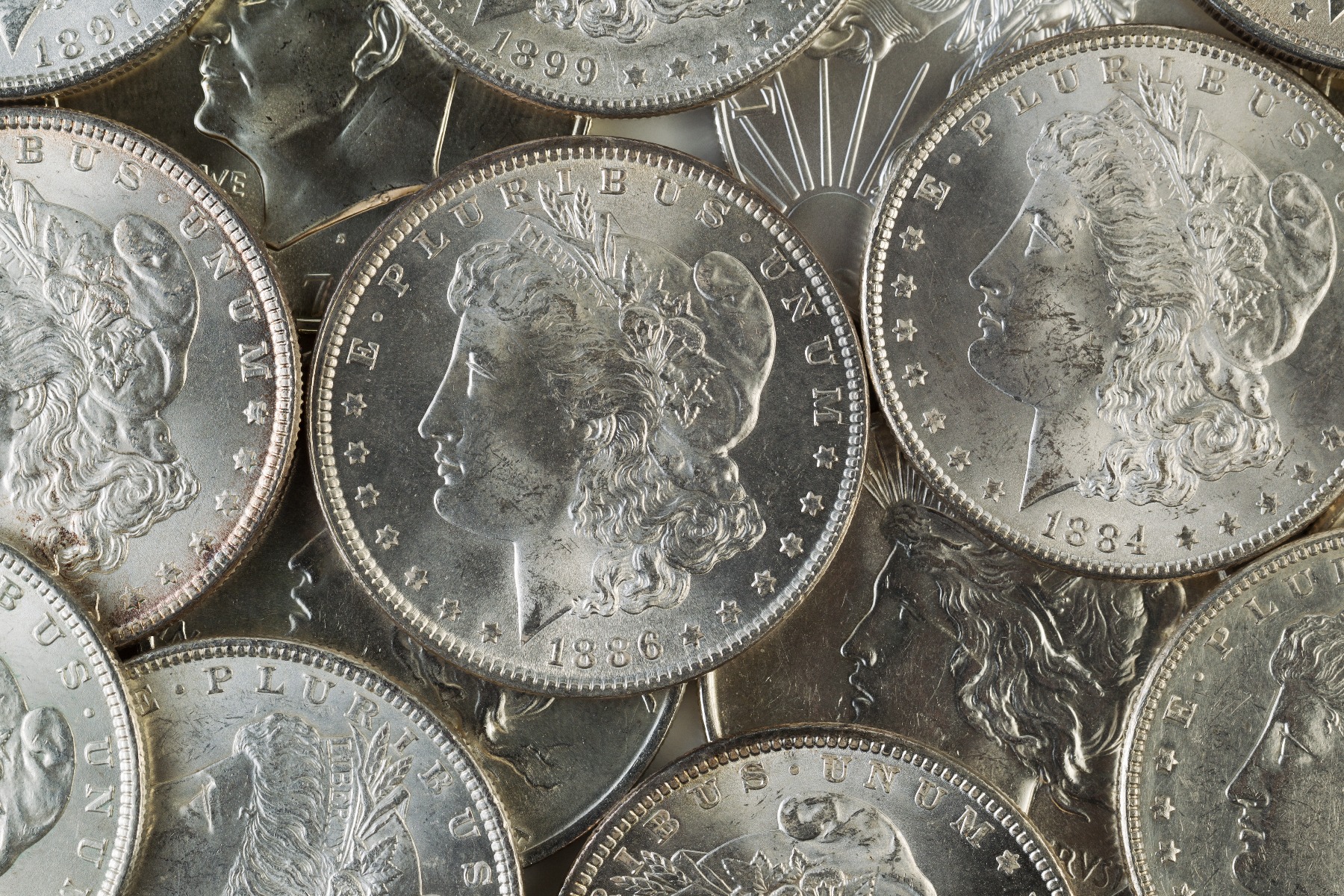 Morgan Silver Dollars, minted from 1878 to 1904 and again in 1921, are by far the most popular and widely collected U.S. coin series in numismatics. America has had a long-time love affair with this legendary lady born out of the Wild West. Few coins have captured the hearts and minds of collectors as much as the Morgan Dollar. Morgan Silver Dollars are fascinating as a coin series, and are both challenging and fun to collect.

Morgan Series; a full set of Morgans is approximately 100 coins, not including overdates and major die varieties.

Key Dates; coins with rare Key Dates and Semi-Key Dates are in demand.

VAM Set; “VAM” is an acronym for Leroy Van Allen and George Mallis who identified many Morgan varieties.

GSA Set; coins from the General Services Administration (GSA) sale from 1972 to 1980. Coin grading is the expression of an opinion that describes the condition of an individual coin that most dealers and collectors would agree with. Over time, numismatists and coin grading services have refined and agreed upon specific definitions, descriptions and numeric values that help all coin collectors describe coins accurately when buying or selling.

Morgan Dollars are large and heavy coins that are made out of silver which is relatively soft and malleable.  The large size of the Morgan Dollar makes it difficult to strike up the design fully. Five mints manufactured Morgans (Philadelphia, New Orleans, Carson City, San Francisco, and Denver (in 1921 only).  The quality of the strikes vary from strong to weak, depending on the year and mint. 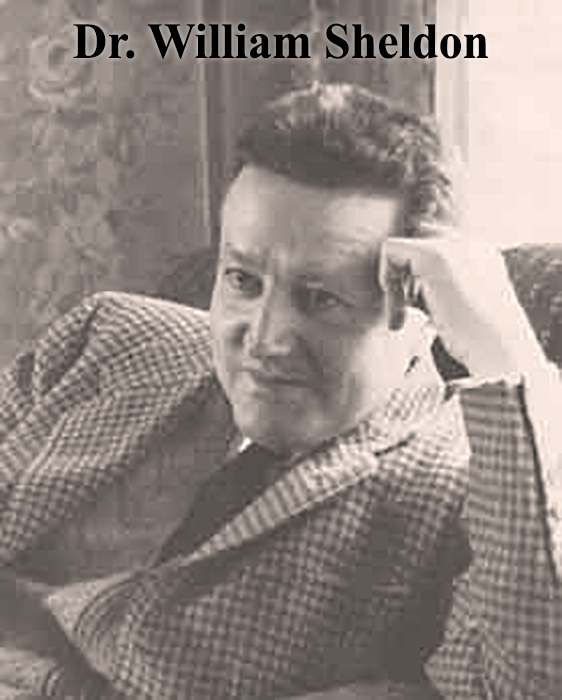 In 1949, a well-known numismatist by the name of Dr. William Sheldon (1898- 1977), assigned alphanumerical grades to his coins in an effort to determine a logical mathematical relationship between the numerical grade and the value of each coin.

The Sheldon Grading Scale was a brilliant combination of numbers and letters, standardizing grading, from a low grade of 1 to a high grade of 70. Today, the Sheldon's grade descriptions are used as the general guide for all coin grading from PCGS and NGC. 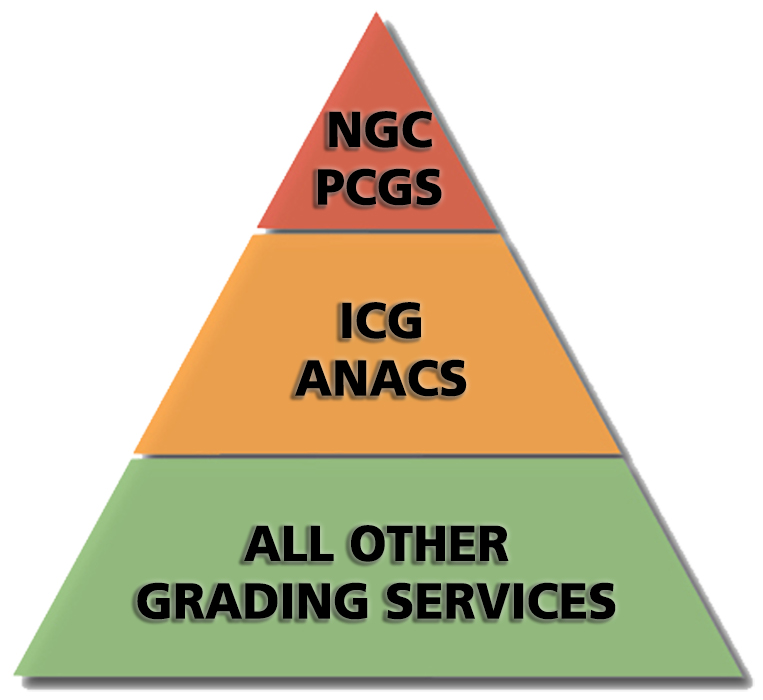 Because of the great consistency in grading, and the guarantees of the services that the top tier offers, coins in PCGS and NGC holders trade sight-unseen, at premium prices over what coins with the same grade in second tier holders trade at, and even less for third tier companies.