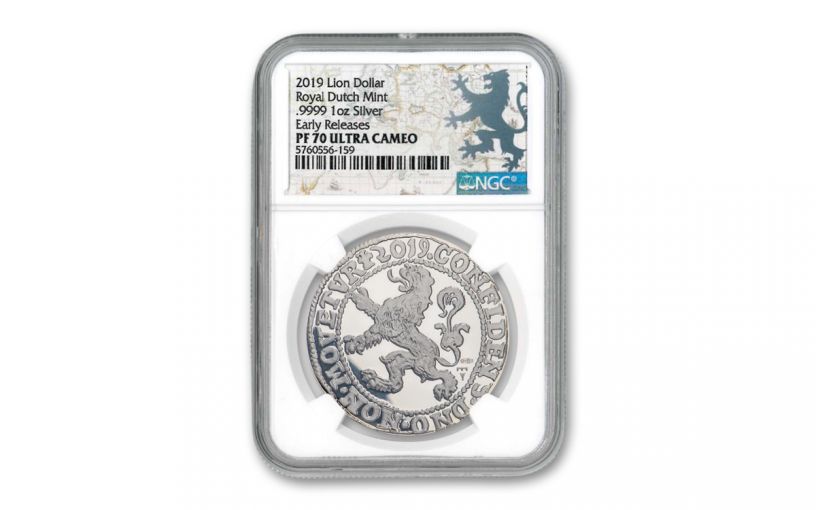 Availability: Out of Stock
This item is currently Out of Stock. Please sign up to be notified if this product becomes available.
Item #
355917
Add to Wish List Add to Wish List Wishlist is for registered customers. Please login or create an account to continue. Add to Compare

The Dutch Lion dollar – or Leeuwendaalder – is considered by many coin experts to be America’s first silver dollar. We’ll let the experts debate that question, but it If it’s not the first silver dollar to circulate in the New World, it was certainly one of the first and proved to be an important coin for Colonial America’s trade and commerce. How important? Important enough to be listed as the fourth coin in the United States Red Book!

The original coins were struck from approximately 1575 to 1713 – and few of these coins exist today for collectors seeking to fill an important hole in their collections. But now you can get the next best thing: an official commemorative restrike from the Royal Dutch Mint that’s crafted in a full ounce of highly pure 99.99% silver!

To pull this off, the Dutch mint masters turned to a vintage 1651-dated Lion Dollar struck in Gelderland, a province of the Netherlands located in the central eastern part of the country. While the designs of the coin stayed basically the same over the years with a heraldic lion on the obverse and a knight standing with his shield on the reverse, they often featured slight changes due to the nature of the minting process in the 1600s. Due to its exceptional high quality, the 1651 Gelderland Lion Dollar proved to be the ideal model to serve as the basis for this modern silver proof.

And the results are extraordinary! Each Lion Dollar available in this has been graded by the Numismatic Guaranty Corporation (NGC) as being in flawless Proof-70 (PF70) condition, a distinction that means your perfectly-graded proof will have ZERO imperfections – showing all features and fields exactly as the engraver and mint intended. In addition, NGC has certified that your proof is an Early Releases (ER) coin, a designation that means your Lion Dollar Proof was received by NGC or an NGC-approved depository within the first 30 days of its release. It will come sonically sealed in an acrylic holder with an exclusive Lion Dollar  label and accompanied by a certificate of authenticity signed by the Royal Dutch Mint Master, Stephan Satijn.

With just 5,000 of these magnificent silver proofs available for worldwide release you’d better act fast because we don’t expect our limited supply to be “lion” around for long!

Dutch Lion Dollars were among the first coins to circulate in the New World in the 1600s, but few remain today. Now you can secure an official restrike with the 2019 Netherlands One-Ounce Silver Lion Dollar Proof. Order yours today!