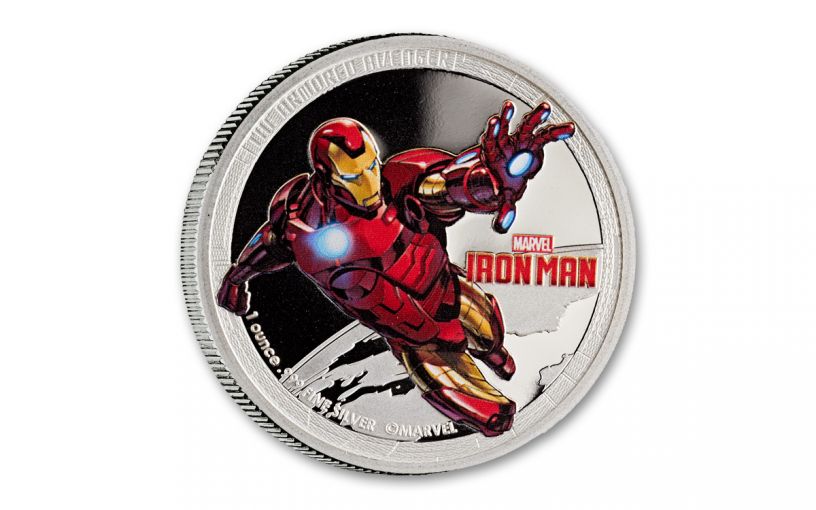 Availability: Out of Stock
This item is currently Out of Stock. Please sign up to be notified if this product becomes available.
Item #
284383
Add to Wish List Add to Wish List Wishlist is for registered customers. Please login or create an account to continue. Add to Compare

Iron Man Looks Better Than Ever in Gleaming Silver

Suffering a severe chest injury while being abducted by terrorists, billionaire playboy industrialist Tony Stark is forced to build a weapon of mass destruction. Instead, he builds himself a devastating suit of armor that he uses to escape. In the years that have followed, Tony has constructed an entire fleet of suits and assumed the role of The Invincible Iron Man, one of the world’s most powerful superheroes and a founding member of the Avengers. A comic book legend, ol’ Shellhead is also instantly recognizable for his numerous appearances in the massively popular Marvel Cinematic Universe.

And now he’s also flying off the surface of a spectacular coin in dazzling full color on this release struck in a full ounce of highly pure 99.9% silver! This $2 legal-tender coin was issued in 2014 as part of Niue’s Avengers series of colorized proof coins. Depicted in his iconic red & gold armor, a gleaming Iron Man is shown patrolling high above the Earth and looks like he might just soar off the coin and into your collection! This gorgeous proof is officially licensed by Marvel and was expertly crafted from hand-selected planchets, polished dies and multiple strikes to produce beautifully frosted details rising over mirror-like fields!

With its full-color depiction of Marvel’s Armored Avenger, you’ll feel like a kid again as the coin looks just like the prized comics you spent hours reading as a kid – or maybe even still read! Plus, it will come with a lapel pin and arrive housed in a decorative metal tin. You’ll also receive a unique colorful Certificate of Authenticity that was made from die-cut stainless steel. Only 3,500 of these coins were struck, so order yours now before our supply runs out!

Make this coin the hero of your collection – add the limited-edition 2014 Niue One-Ounce Silver Avengers Iron Man Proof to your cart today!