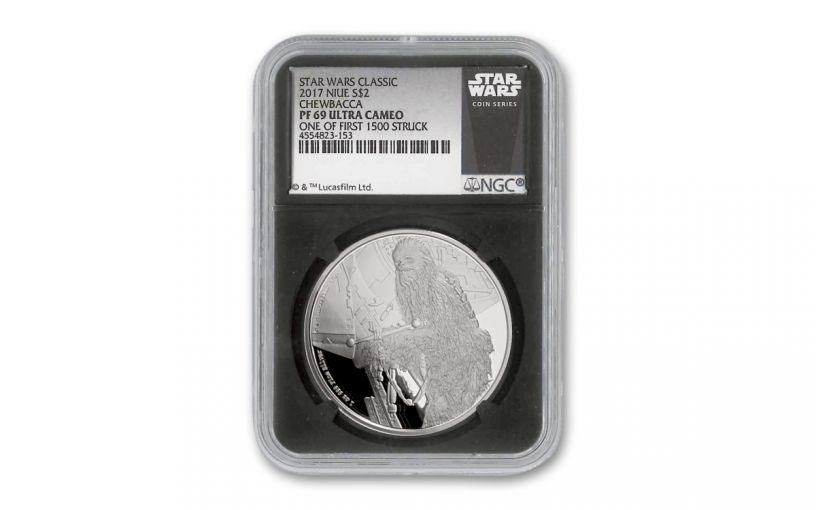 Availability: Out of Stock
This item is currently Out of Stock. Please sign up to be notified if this product becomes available.
Item #
310281
Add to Wish List Add to Wish List Wishlist is for registered customers. Please login or create an account to continue. Add to Compare

The Galaxy's Favorite Wookiee in One Ounce of 99.9% Pure Silver!

Whether you’re smuggling illicit cargo from under the noses of dangerous criminals, fighting off imperial stormtroopers, or just need someone to watch your back in myriad seedy bars across the galaxy, there’s no better wing man than a hairy Wookiee – and the best of them all is the legendary Wookiee named Chewbacca.

Unwavering in his loyalty to his friends, “Chewie” is the last of his race and one of the most popular characters in the entire Star Wars™ film franchise. He’s also featured on one of the most coveted releases in the New Zealand Mint’s popular Star Wars Classic collection of pure silver coins! Struck in one full ounce of 99.9% silver, this 2017 silver proof features Chewbacca from the original Star Wars film from 1977 blasting away with his laser crossbow from the foot of the Millennium Falcon, the iconic ship that he and partner Han Solo – along with able assistance from Luke Skywalker and Obi-Wan Kenobi – used to rescue Princess Leia from the evil clutches of Darth Vader aboard the Death Star.

Each 2017 Niue One-Ounce Silver Star Wars Chewbacca Proof available in this offer has been graded by the Numismatic Guaranty Corporation (NGC) as being in near-perfect Proof-69 Ultra Cameo (PF69UC) condition, a distinction that means your almost-flawless coin will showcase an impressive full strike and indistinguishable imperfections – well above and beyond the quality of the vast majority of coins in the series. In addition, NGC has certified that these Chewbacca Proofs are First Strike (FS) coins, meaning that they were among the first struck by the mint and was verified within the first 30 days of issue. Collectors seek out these coins because they are produced with new dies and considered to have sharper strikes and deeper mirrors than those that are struck later.

Just 10,000 of these 2017 Niue One-Ounce Silver Star Wars Chewbacca Proofs were struck for worldwide release, and we were fortunate to have discovered a few in this high grade. Let our discovery be your good fortune; order one of these impressive proofs while they’re still available!

Don’t miss your chance to get the 2017 Niue One-Ounce Silver Star Wars Chewbacca Proof! Just 10,000 of these 99.9% silver coins were struck, and these ones come graded by NGC in Proof-69 Ultra Cameo First Strike condition! Order yours today!