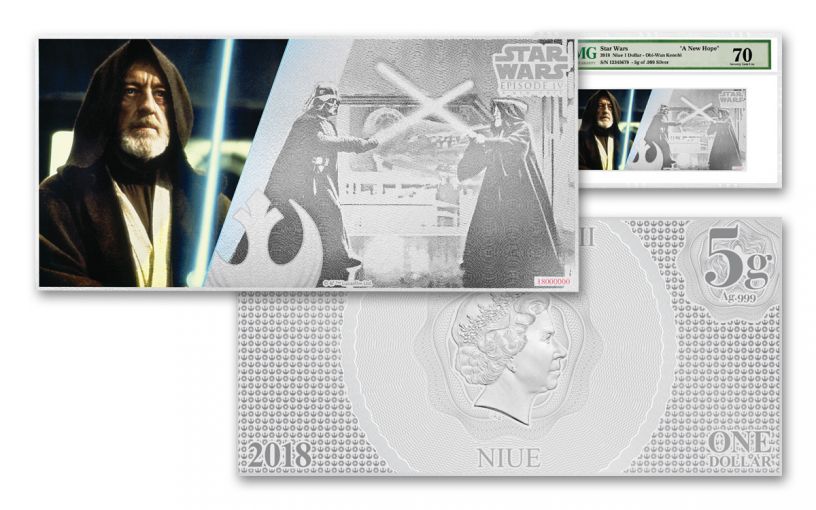 Availability: Out of Stock
This item is currently Out of Stock. Please sign up to be notified if this product becomes available.
Item #
332519
Add to Wish List Add to Wish List Wishlist is for registered customers. Please login or create an account to continue. Add to Compare
Product Description

Honoring a Key Figure of the Star Wars Franchise

When Star Wars debuted in 1977 with what would come to be called Episode IV: A New Hope, the film took the entertainment industry by storm. Fans loved the clear contrast between good and evil, and they saw the importance of passing values and skills on from one generation to the next. Obi-Wan Kenobi did this for two of the most important characters in the entire series, first (but second in terms of releases) training Anakin Skywalker and later serving as a mentor to Luke. Wise and skillful, he trained the young Luke in the ways of the Force. Now, the New Zealand Mint celebrates the iconic character with this 2018 Niue five gram Silver Proof-like Star Wars Obi-Wan Kenobi.

For all the franchise’s countless successes, just one actor thus far has received an Academy Award nomination for his work in it. That actor is Alec Guinness, who portrayed Obi-Wan Kenobi. He was the mentor that moviegoers had, wished they had, or aspired to be. His guidance and education were emblematic of everything that a mentor is supposed to be, and he earned his nomination by having that come across to each and every viewer. Whether you are a mentor or have had one, or you simply love all things Star Wars, order this Proof-like 2018 five gram Silver Obi-Wan Kenobi Foil Note at GovMint.com today!