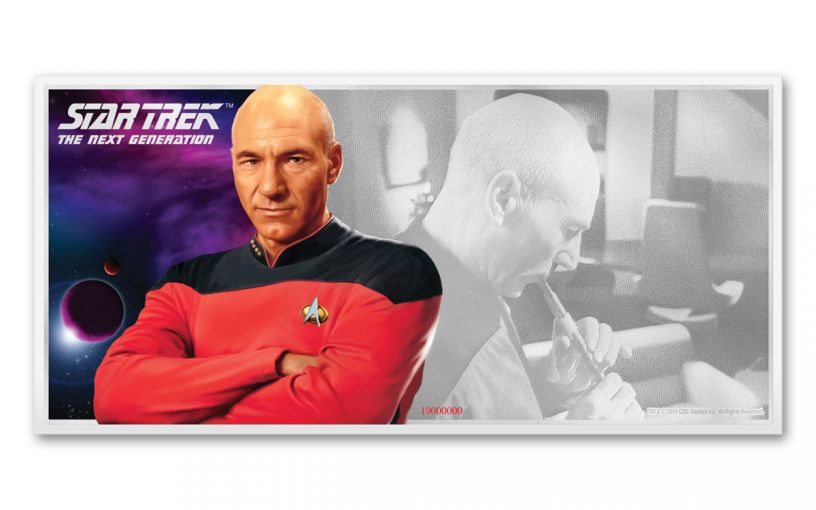 Availability: Out of Stock
This item is currently Out of Stock. Please sign up to be notified if this product becomes available.
Item #
356755
Add to Wish List Add to Wish List Wishlist is for registered customers. Please login or create an account to continue. Add to Compare

Make It So! Add the Star Trek Captain Picard Silver Foil Note to Your Collection!

Fans of Captain Jean-Luc Picard were ecstatic with the news that their beloved Starfleet officer would be returning to television as part of the Star Trek: Picard show slated to debut on CBS All Access in January of 2020. The legendary captain of the USS Enterprise from the Star Trek: The Next Generation series, Picard as played by actor Patrick Stewart has proven to be one of the most popular characters in the entire Star Trek franchise.

But before Picard returns to television, he can join your collection with this colorized five-gram silver coin note! His stern countenance radiates off this silver foil note in vibrant color. You can almost hear him bellow in his deep baritone voice, “Make It So!” That image is perfectly contrasted by Picard’s softer side as right next to full-color portrait is an engraved image of him playing his Kataan flute. Not only was this spectacular note minted in 5 grams of highly pure 99.9% fine silver, but it measures 150 mm x 70 mm for a massive canvass to display Captain Picard in all his star-trekking glory.

The first release in a new collection that pays tribute to the Star Trek: The Next Generation television series, the silver foil note was struck for the island nation of Niue by the New Zealand Mint. Featuring deep mirrored fields and immaculate colorized design elements, you can now relive all of Captain Picard’s thrilling adventures by securing this silver coin note!

Collectors will be quick to beam these silver coin notes to their carts. Order yours now and we’ll have our transporter room get one shipped to you at warp speed!