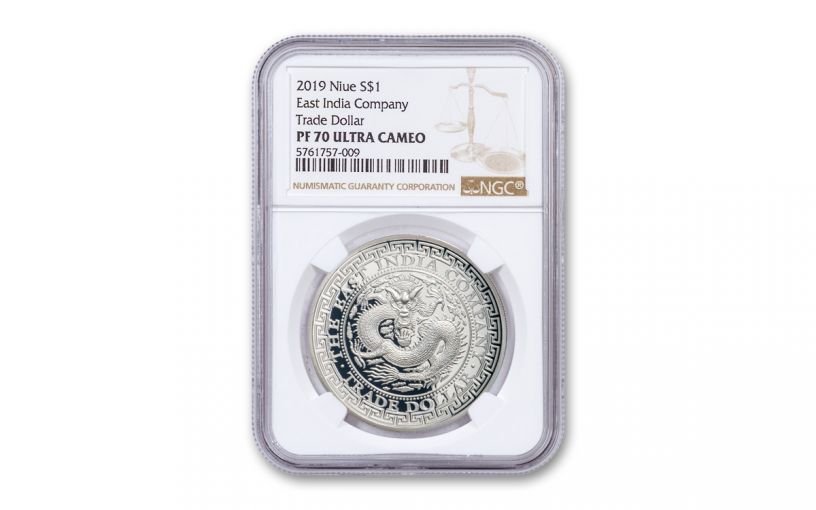 Availability: In Stock
This item will ship within 2 business days.
Item #
352901
Review this product
CC Payments as low as
$99.50 / month
Add to Wish List Add to Wish List Wishlist is for registered customers. Please login or create an account to continue. Add to Compare
Product Description

The Coin That Joined East to West

First issued in 1889, Chinese silver trade coins were originally struck only in Kwangtung Province using British equipment. The goal of the coins – created at the request of the indomitable Empress Dowager Cixi – was to allow China to trade more efficiently with the rest of the world. Now, 130 years later, the Chinese Trade Dollar is being honored with a beautiful coin by London’s famous East India Company.

Struck in a full ounce of highly pure 99.9% silver, this $1 Niue legal-tender coin is a carefully crafted restrike of the original Chinese Trade Dollar. It was only natural that a dragon was the theme used for those coins. Symbolic of the emperor, dragons are legendary creatures in Chinese mythology and folklore, with appearances found in an archaeological context as far back as the fifth millennium B.C. Inspired by Japanese and Korean coins, the design of the ferocious curving dragon soon became standard across all provinces of China, not just Kwangtung, and remained on China’s coins until the early decade of the new millennium.

Your 2019 Niue One-Ounce Silver Chinese Trade Dollar Proof has been graded by the Numismatic Guaranty Corporation (NGC) as being in flawless Proof-70 Ultra Cameo (PF70UC) condition, a distinction that means your perfectly-graded proof will have ZERO imperfections – showing all features and fields exactly as the engraver and mint intended. It will come sonically sealed in an acrylic holder giving you the best in protection while granting clear sightlines into every beautiful detail.

The East India Company’s 2019 One-Ounce Silver Chinese Trade Dollar is the third coin in a five-year series. Other coins include the British, Japanese, French-Indonesian and U.S. Trade Dollars. The series pays tribute to the most popular and sought-after trade pieces issued from the late 1800s to the early 1900s.

Just 1,888 proof coins are available for worldwide release – a very auspicious number since the number “8” is considered lucky in Chinese culture. Lucky though it may be, it’s an incredibly limited mintage for students of history, coin collectors and silver stackers! Don’t miss this chance to secure one for your collection! Secure this gorgeous silver dragon coin now before it’s once again lost to the history books.

These coins are expected to sell quickly – and with a small mintage of just 1,888 worldwide, our limited supply will not last long. Order yours today!