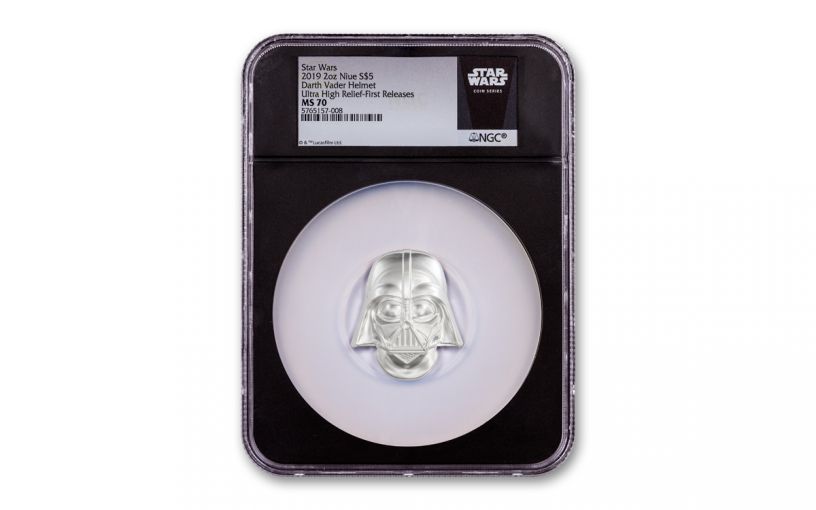 Availability: Out of Stock
This item is currently Out of Stock. Please sign up to be notified if this product becomes available.
Item #
353016
Add to Wish List Add to Wish List Wishlist is for registered customers. Please login or create an account to continue. Add to Compare

Now you can study Vader’s malevolent mask and helmet without threat of being mind-controlled or sliced in half by a light saber. Struck in two full ounces of highly pure 99.9% fine silver, this legal-tender coin is the first release in the New Zealand Mint’s series of sculpted Star Wars Helmet Coins. Each 2019 Niue Two-Ounce Silver Darth Vader Helmet Coin available in this offer will come graded by the Numismatic Guaranty Corporation (NGC) as being in flawless Mint State-70 (MS70) condition, a distinction that means your perfectly-graded coin will have ZERO imperfections – showing all features and fields exactly as the engraver and mint intended.

In addition, NGC has certified your Darth Vader Helmet Coin to be a First Releases (FR) coin, a designation that means it was received by NGC or an NGC-approved depository within the first 30 days of its release. Collectors seek out these coins because they are produced with new dies and considered to have sharper strikes and deeper mirrors than those that are struck later. It will also come sonically sealed in an acrylic holder with a special black display core.

Issued on behalf of the South Pacific Island nation of Niue, the coin’s sculpted reverse is dominated by the ominous face of Darth Vader’s helmet and mask – you can almost hear Vader’s deep baritone voice imploring you to join him on the Dark Side! Instead of joining Darth Vader on the Dark Side, join him on the silver side with this impressive collectible coin. But you must hurry; just 5,000 were struck for worldwide release – a limited edition that is much too small for the millions of Star Wars fans across the planet. Search your feelings, you KNOW you want this coin. Give in and click one to your cart today!