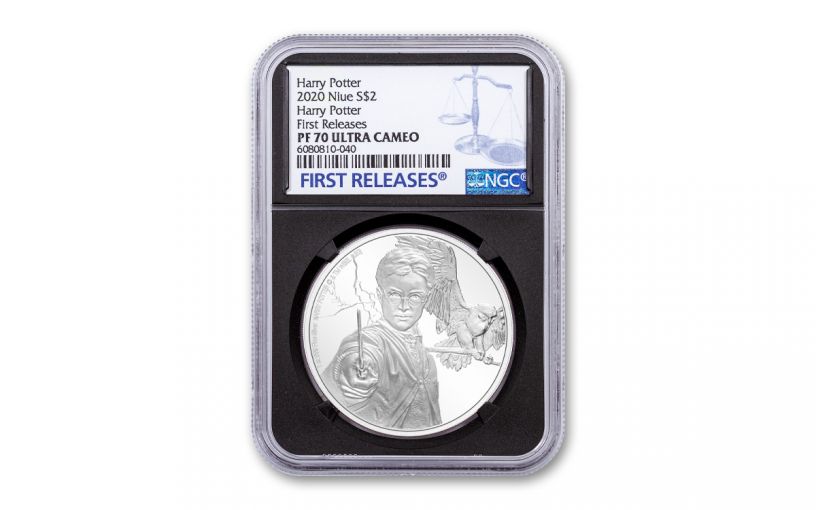 Availability: Out of Stock
This item is currently Out of Stock. Please sign up to be notified if this product becomes available.
Item #
367423
Add to Wish List Add to Wish List Wishlist is for registered customers. Please login or create an account to continue. Add to Compare

Let This Harry Potter Silver Proof Cast Its Spell on You

Harry Potter is not only a teenaged wizard with a nasty lightning bolt scar on his forehead, he’s also the central character in author J.K. Rowling’s popular book and film series — a franchise that has an estimated worth of $25 billion!

Exciting Design of “The Boy Who Lived”

Orphaned as a baby, Harry Potter — The Boy Who Lived — had no idea that he was one of the world’s most talented wizards. He would demonstrate his abilities in a series of epic adventures at Hogwarts School of Witchcraft and Wizardry. Now you can be a part of Harry’s world thanks to a coin series dedicated to all things Harry Potter. Struck in a full ounce of highly pure 99.9% silver, this coin is the fourth release in the Harry Potter Classics series that pays tribute to the characters and locations in the Harry Potter film series. A determined-looking Harry stands tall in his Hogwarts robes on the coin’s design as he wields his magic wand. As an added touch, Hedwig, Harry’s pet snowy owl, spreads its wings as it alights on a wing in the background.

In addition, your 2020 Niue One-Ounce Silver Harry Potter Classics Proof has been graded by the Numismatic Guaranty Corporation (NGC) as being in flawless Proof-70 Ultra Cameo (PF70UC) condition, a distinction that means your perfectly-graded proof will have ZERO imperfections — showing all features and fields exactly as the engraver and mint intended. The detail is so sharp and clear you’ll want to fly to Hogwarts and learn a lesson or two in casting spells from the master wizard himself!

What’s more, NGC has certified that your proof is a First Releases (FR) coin, a designation that means your coin was received by NGC or an NGC-approved depository within the first 30 days of the its release. Collectors seek out these coins because they are produced with new dies and considered to have sharper strikes and deeper mirrors than those that are struck later. It will come sonically sealed in an acrylic holder with a unique black display core.

Each coin will be accompanied by its original government packaging from the New Zealand Mint that consists of a custom-designed wooden display case and a Harry Potter-themed Certificate of Authenticity. With just 5,000 coins minted for the entire world, however, these enchanting treasures are sure to vanish in short order. Make sure that one of the coins that disappears from our vault reappears in your collection!

The time is now to say, “Accio, Harry Potter Silver Coin!” With just 5,000 of these highly collectible proof coins available, you’d better speak that magical phrase now before a bunch of other Muggles scoop them all up!