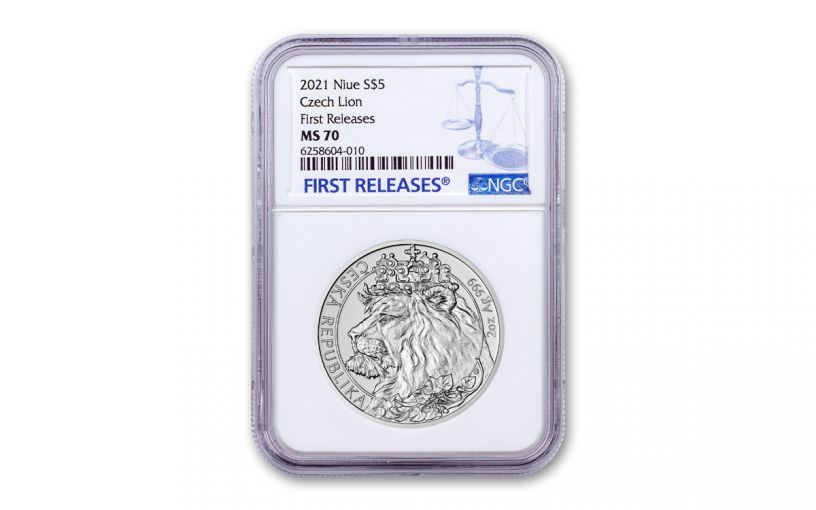 Availability: Out of Stock
This item is currently Out of Stock. Please sign up to be notified if this product becomes available.
Item #
409136
Add to Wish List Add to Wish List Wishlist is for registered customers. Please login or create an account to continue. Add to Compare
Recommended Products
Product Description

When The Czech Mint decided to strike its first-ever silver bullion coin, it settled upon a dynamic theme for its initial entry to put forth on the world stage: the national symbol of the Czech Republic itself, a regal-looking double-tailed lion! The heraldic beast can now be part of your collection with this spectacular coin struck in two full ounces of highly pure 99.9% fine silver!

Crown Your Collection With the Bohemian Lion

The design on this coin seems to bound from its surface. It shows a proud, heavily maned lion represent power and sovereignty. Atop its tawny head rests the Crown of Saint Wenceslas, a crown that forms part of the Bohemian Crown Jewels. Bohemia is now part of the Czech Republic and the Bohemian Crown Jewels are stored in an undisclosed location within Prague’s St. Vitus Cathedral. The vault is sealed with seven locks whose keys are held by seven different government and religious officials. The final design element is a sprig from a Linden Tree, the Czech Republic’s national tree.

The lion became part of Bohemian heraldry thank to the legendary story of Prince Bruncvik. According to the tale, Bruncvik was a mythical prince who traveled to Africa, where he helped a lion defeat a dragon. It’s one of the most famous stories of how the exotic lion became symbol of the Czech Republic. And, while a decidedly Czech theme, this coin is actually $5 legal Tender in Niue, a small island nation in the South Pacific Ocean that licensed that these coins be struck by the Czech Mint.

Each coin available here has been graded by the Numismatic Guaranty Corporation (NGC) as being in flawless Mint State-70 (MS70) condition, a distinction that means these perfectly-graded coins have ZERO imperfections — showing all features and fields exactly as the engraver and mint intended! In addition, NGC has certified that these Silver Czech Lions are First Releases (FR) coins, a designation that means they were received by NGC or an NGC-approved depository within the first 30 days of their release. Collectors seek out these coins because they are produced with new dies and considered to have sharper strikes and deeper mirrors than those that are struck later.

And, with a limited edition of just 4,435, these coins may not be around for long. The culturally significant theme and silver purity will have collectors and silver stackers alike vying for these beautiful coins. Don’t miss out on this first-ever release, click the 2021 Niue Two-Ounce Silver Czech Lion to you cart today!

Secure the Czech Mint’s first silver bullion coin with the 2021 Niue Two-Ounce Silver Czech Lion. With such a small limited edition, these coins may not be “lion” around for long so reserve yours now!