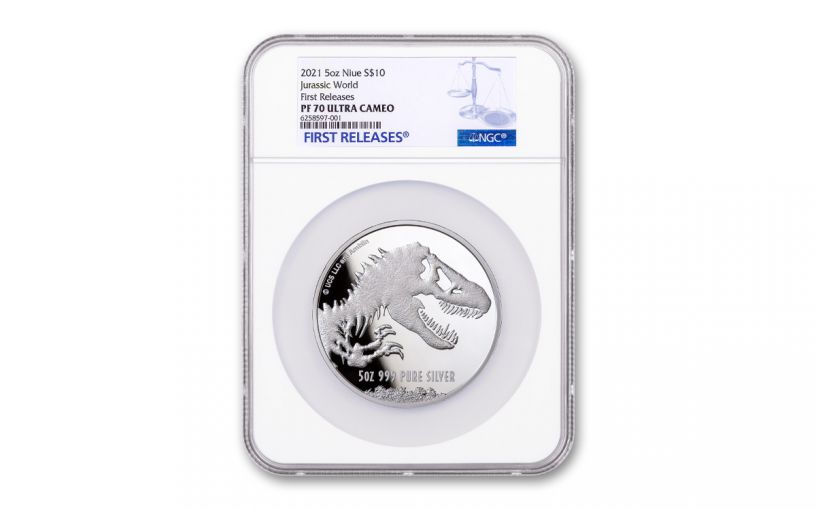 Availability: Out of Stock
This item is currently Out of Stock. Please sign up to be notified if this product becomes available.
Item #
409454
Add to Wish List Add to Wish List Wishlist is for registered customers. Please login or create an account to continue. Add to Compare
Recommended Products
Product Description

Add a Shot of Dinomania To Your Collection

Dinosaurs have always been popular, especially among children who used their sand boxes to recreate the prehistoric world of these extinct thunder lizards. But “dinomania” really took off following the release of the 1993 film Jurassic Park that brought these terrifying creatures to life. Today, the Jurassic World film franchise has grossed more than $10 billion over the course of five feature films. It’s also spawned several coin releases, including this magnificent coin that’s sure to appeal to coin collectors and film fans alike.

The Familiar Face of T-Rex

Struck in five full ounces of highly pure 99.9% fine silver, this spectacular coin features the trademark image of the Jurassic Park and Jurassic World films: the fossilized skull of a Tyrannosaurus Rex! This big boy did more than his fair share of damage wreaking havoc on the scientists who attempted to create an amusement park populated with creatures cloned from dinosaur DNA. And, with the next installment in the franchise, Jurassic World: Dominion, slated to hit theaters in 2022, demand for this coin is sure to be intense.

High-Grade Coins From Among the First Released

This coin was also struck with a scintillating Proof finish with beautiful frosted details rising over mirror-like fields with designs that seem to burst from the surface of the coin like a kill-crazy T-Rex that has scented its prey! In fact, each 2021 Niue Five-Ounce Silver Jurassic World Coin available here was graded by the Numismatic Guaranty Corporation (NGC) as being flawless Proof-70 Ultra Cameo (PF70UC) condition, a distinction that means these perfectly-graded coins have ZERO imperfections — showing all features and fields exactly as the engraver and mint intended.

In addition, NGC has also certified that these coins are First Releases (FR) coin, a designation that means they were received by NGC or an NGC-approved depository within the first 30 days of their release. Collectors seek out these coins because they are produced with new dies and considered to have sharper strikes and deeper mirrors than those that are struck later.

Released on behalf of Niue, a small island nation in the South Pacific Ocean, this $10 legal-tender coin will be accompanied by its original government packaging that consists of a colorful Jurassic World themed box. But you must be quick; just 500 of these coins have been authorized for worldwide release. Get yours now before our entire allotment becomes extinct!

Don’t miss your chance to get the 2021 Niue Five-Ounce Silver Jurassic World Proof. Order yours now before they’re all gone!