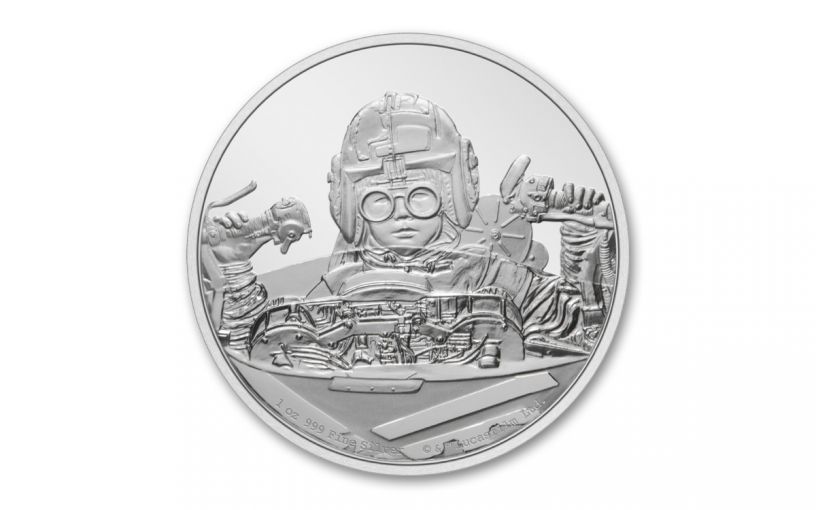 Availability: In Stock
This item will ship within 2 business days.
Item #
410535

Before Darth Vader become one of the greatest villains ever to appear on the silver screen, he was a boy named Anakin Skywalker. We first met young Anakin in 1999’s Star Wars: Episode I – The Phantom Menace where he was depicted as a 9-year-old child enslaved by Watto, an ill-tempered junk dealer on the planet Tatooine. Despite his age, Anakin proved to be a gifted pilot, and wins his freedom in an epic podrace reminiscent of the chariot race from the classic 1959 film Ben Hur.

A Gifted Young Boy Strong With The Force

Played by Jake Lloyd, who was just 8-years-old during filming, Anakin was forced to leave his mother on Tatooine and was taken under the wing of Jedi Knight Obi-Wan Kenobi, who trained the young boy in the ways of The Force. And now, Anakin returns on this release in New Zealand Mint’s latest Star Wars Classics coin series that shows an image of Anakin wearing helmet and goggles at the helm of his podracer. The iconic image is struck in a full ounce of highly-pure 99.9% fine silver.

Plus, each coin available in this offer comes in gorgeous Gem Proof condition, meaning it was expertly crafted by the mint from hand-selected planchets, polished dies and multiple strikes to produce beautifully frosted details rising over mirror-like fields! In addition, the coin is officially licensed by Lucasfilm and Disney, so you know it lives up to the high standards Star Wars fans have come to expect. Each coin will also come beautifully housed in its original mint packaging that consists of a premium black box stored inside a Star Wars-branded outer box and accompanied by a mint-issued Certificate of Authenticity.

Through his adventures with Obi-Wan Kenobi, Anakin Skywalker would meet and fall in love with the beautiful and resourceful Queen Padmé Amidala, sparking a series of events that would drive the Star Wars films throughout their run. The new 2021 Niue Star Wars Anakin Skywalker One-Ounce Silver Coin is the perfect piece to start or add to your own Star Wars collection. Just 10,000 of these coins are available for worldwide release and they’re sure to be coveted by coin collectors, Star Wars fans and silver stackers alike. So, don’t wait; order one – or several – right now!