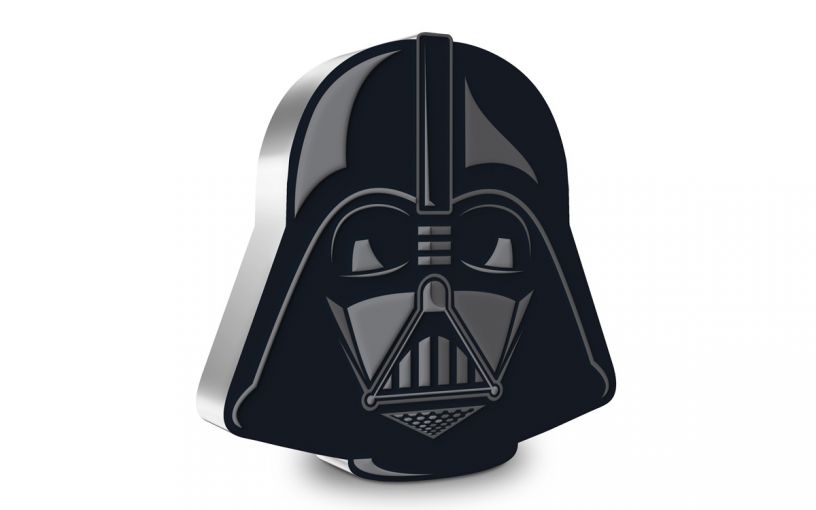 Availability: In Stock
This item will ship within 2 business days.
Item #
422462
Add to Wish List Add to Wish List Wishlist is for registered customers. Please login or create an account to continue. Add to Compare
Recommended Products
Product Description

Now you can study Vader’s malevolent mask and helmet without the threat of being mind-controlled or sliced in half by a light saber. Struck in a full ounce of highly pure 99.9% fine silver, this colorized and shaped coin is the first release in the New Zealand Mint’s Star Wars Faces of the Empire series. Released on behalf of Niue, a small island nation in the South Pacific Ocean, this $2 legal-tender Darth Vader Coin will come in gorgeous Gem Proof condition, meaning it was expertly crafted by the mint from hand-selected planchets, polished dies and multiple strikes to produce beautifully frosted details rising over mirror-like fields.

The Ominous Face Of Darth Vader

Issued on behalf of the South Pacific Island nation of Niue, the coin’s reverse is dominated by the ominous face of Darth Vader’s helmet and mask. You can almost hear Vader’s deep baritone voice imploring you to join him on the Dark Side! Instead of joining Darth Vader on the Dark Side, join him on the silver side with this impressive collectible coin. But you must hurry; just 10,000 were struck for worldwide release — a limited edition that is much too small for the millions of Star Wars fans across the planet. Your coin will also come beautifully housed in its original government packing from the mint which consists of a retail friendly black display case that incorporates a Certificate of Authenticity within the packaging.

Search your feelings, you KNOW you want this coin. Give in and click one to your cart today!