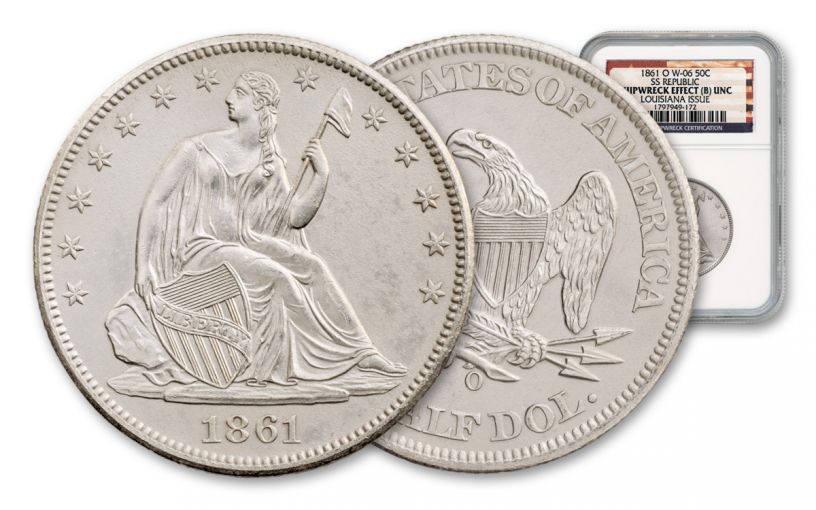 Availability: Out of Stock
This item is currently Out of Stock. Please sign up to be notified if this product becomes available.
Item #
348804
Add to Wish List Add to Wish List Wishlist is for registered customers. Please login or create an account to continue. Add to Compare
Recommended Products
Product Description

Sunken Civil War-Era Silver Struck by the State of Louisiana

During the Civil War, control of the New Orleans Mint was seized multiple times – first by the Republic of Louisiana, then the Confederate States of America, and finally the United States of America. When the U.S. finally retook control, a huge volume of coins struck during these tumultuous years were shipped to New York City until late in 1865, when the coins were loaded aboard the SS Republic and sent back to New Orleans to help the South rebuild.

The coins never arrived. Soon after the Republic departed on October 18 with a reported $400,000 in gold and silver coins it was caught in a massive storm. On October 25 the ship went down to the bottom of the Atlantic, where she wouldn’t be found until 2003. Incredibly, she still contained thousands of gold and silver coins – including this Seated Liberty Half Dollar, struck during the scant 28 days in 1861 when the New Orleans Mint was operated by the State of Louisiana. It’s not just a scarce piece of New Orleans Mint history, it’s also a scarce piece of sunken Civil War-era treasure!

This fascinating piece of American numismatic history comes certified by the Numismatic Guaranty Corporation (NGC) as official Shipwreck Effect. When was the last time you added a real piece of American sunken treasure to your collection – one that spent nearly 160 years underwater? Don’t miss out; order this spectacular coin today!

Don’t miss your chance to secure an 1861-O New Orleans Mint Seated Half Dollar coin recovered from the famous SS Republic shipwreck. Click it to your cart today!