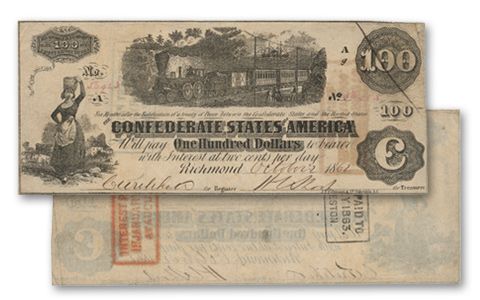 The banknotes issued by the Confederate States of America during the Civil War contain some of the most detailed and breathtaking engravings of Southern life ever printed. In addition, each note was actually hand - signed and dated! This famous Richmond, Virginia $100 note features a milk maid on the left and a large central engraving of a powerful locomotive with a steamship in the distance. The note promises to pay the bearer "interest at two cents per day" - but only "six months after...a treaty of peace between the Confederate States and the United States." This unfulfilled promise makes this historic Confederate note a fascinating "must have." We are down to only a few notes, each in Very Fine condition - so act now to get yours!