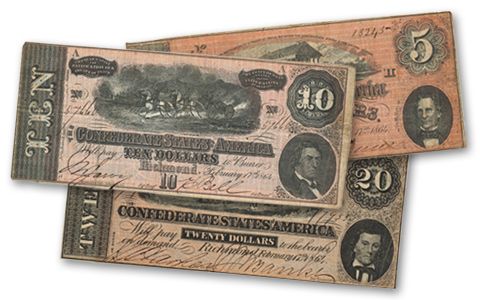 Southern Gentlemen More Popular Than Ever!

Now that the 150th anniversary of the Civil War is underway, collectibles from the conflict are hotter than ever. Although memorabilia from the North is desirable, collectibles from the South fly out of our vaults faster than greased lightning. Witness these historic Southern Gentlemen Currency Sets. Issued between 1862 and 1864 by the Confederate States of America, the notes feature some of the most prominent figures from the South: R.M.T. Hunter ($5) and C.G. Memminger ($10) and Vice President Alexander Stevens ($20). Act fast, these sets won't last!