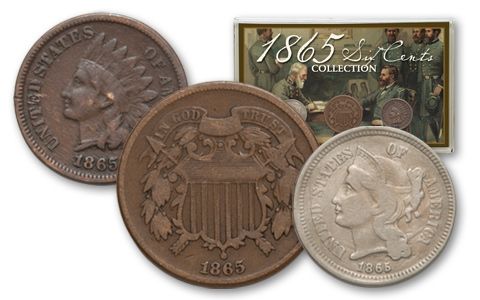 Availability: In Stock
This item will ship within 2 business days.
Item #
223835
Add to Wish List Add to Wish List Wishlist is for registered customers. Please login or create an account to continue. Add to Compare
Recommended Products
Product Description

In the final year of the Civil War, General Robert E. Lee surrendered to General U.S. Grant at Appomattox. The Confederacy was officially dissolved. And President Lincoln was assassinated by John Wilkes Booth.

1865 changed the fortunes of Americans in both the North and the South. And now you can own three of the important U.S. coins that were actually in circulation that turbulent year: an authentic Indian Head Cent, Two Cent Piece and Three Cent Nickel - all dated 1865!

The bronze 1865 Indian Head Cent was the second year of issue for this non-copper/nickel coin - and it continued to be struck until 1909. One of America's classic coins, this Indian Head is a must-have for any collection!

The copper 1865 Two Cent Piece was a short-lived series struck from only 1864-1872 - and the first U.S. coin design to include the motto, "In God We Trust". It's a denomination that disappeared decades ago and one that few people realize the U.S. ever issued!

The long-gone copper/nickel 1865 Three Cent Nickel was first struck in 1865. Many collectors aren't even aware that this coin was ever even struck!

As America marks the 150th Anniversary of the conflict between 2011 and 2015, vintage Civil War issues like these are in high demand - making it difficult to obtain large quantities of the coins in this collection.

So acquiring three genuine coins from this historic American era for under $100 just makes good "cents". But less than 100 sets are available. Get yours now - before they sell out!