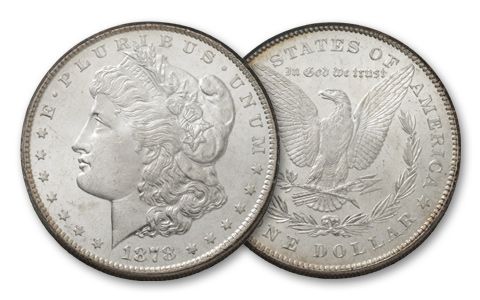 Availability: Out of Stock
This item is currently Out of Stock. Please sign up to be notified if this product becomes available.
Item #
223861
Add to Wish List Add to Wish List Wishlist is for registered customers. Please login or create an account to continue. Add to Compare
Recommended Products
Product Description

The silver dollar that started a legend: the first-year 1878-P Morgan

Originally, George T. Morgan designed it with seven feathers, then one more was added for a fuller look. Later the Morgan Silver Dollar was changed because experts stepped forward to critique the design claiming bald eagles in fact have an odd number of feathers—so a transitional seven over eight feather design was issued. A revised 7 tail feather design was struck later in 1878 to correct the mistake, which created a unique collector variation, especially because it was only minted in Philadelphia.
This 1878-P 7TF Morgan Silver Dollar is a first and last all-in-one: it’s a first year issue 1878 Philadelphia Mint Morgan Silver Dollar and it’s also the last of three reverse tail feather varieties struck during its first year. Each comes in Brilliant Uncirculated (BU) condition. Order yours today!