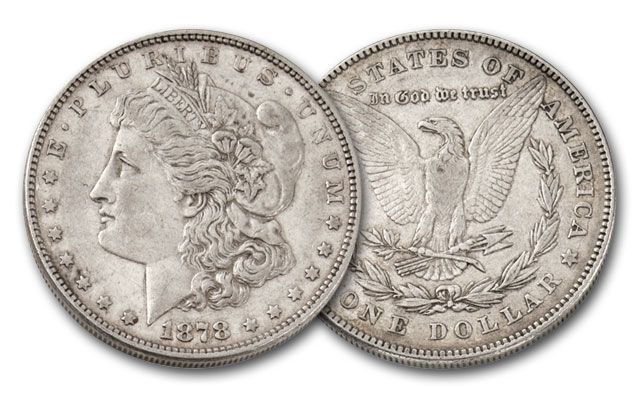 Availability: In Stock
This item will ship within 2 business days.
Item #
221982
Add to Wish List Add to Wish List Wishlist is for registered customers. Please login or create an account to continue. Add to Compare
Recommended Products
Product Description

The silver dollar that started a legend: the first-year 1878-P Morgan!

Arguably the most coveted and collected vintage U.S. silver coin of all time, Morgan Silver Dollars are always in demand. Among the most coveted? First-year 1878 Morgans – hefty silver coins that began their life at the "Mother Mint" in Philadelphia. Struck from more than three quarters of an ounce of 90% pure silver ore mined from Nevada's massive Comstock Lode, each 1878-P Morgan features a distinctive seven tail-feather design. And, 138 years after they first rolled off the presses, you can still own a 1878-P Morgan – in lightly circulated Extremely Fine (XF) condition!

Not many are still around in this condition. In fact, experts estimate that only 15% of the total mintage of Morgans still exist after government mandated meltings and the ravages of time. So, finding any quantity of these authentic first-year coins has become more difficult every year. Don't wait 'til they're gone for good – add one to your collection now!