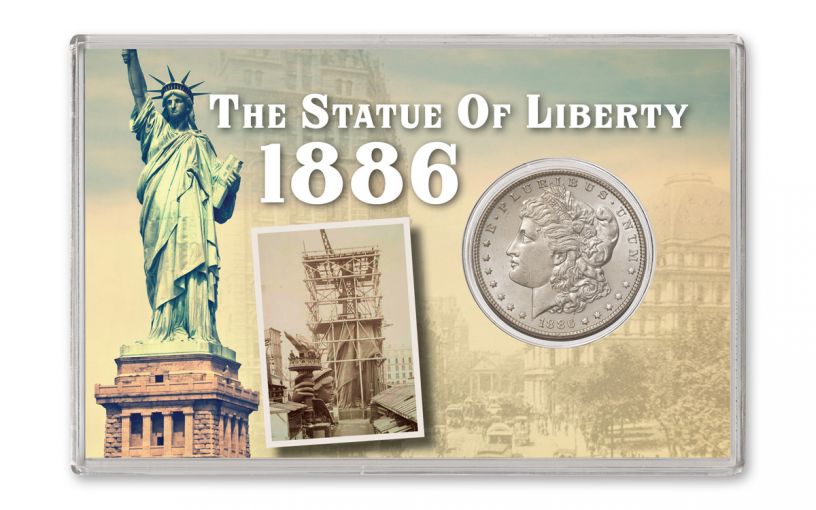 Availability: In Stock
This item will ship within 2 business days.
Item #
349349
Add to Wish List Add to Wish List Wishlist is for registered customers. Please login or create an account to continue. Add to Compare
Recommended Products
Product Description

As immigrants in the late 19th century sailed into New York Harbor, a towering beacon lit the way welcoming them to her shores. The towering beacon was, of course, the Statue of Liberty. And since her dedication more than 130 years ago on October 28, 1886, the gigantic sculpture has assumed the mantle of arguably the most iconic landmark in the United States of America.

During the dedication ceremonies it’s highly likely that many of the people in attendance had a few Lady Liberty coins in their pockets in the form of these big, bold and beautiful Morgan Silver Dollars. It’s also likely that those coins would have originated from the U.S. Mint’s “Mother Mint” located in Philadelphia just 80 miles south of Liberty Island.

By the end of 1886, the Philadelphia Mint had coined nearly 20 million Morgans – and impressive number to be sure. But due to the ravages of time, commerce and government-sanctioned meltings, most of these hefty silver dollars have been taken from us. In fact, numismatists have estimated that as few as 15% of ALL Morgans ever struck have survived to this day in ANY condition!

Fortunately for you, we managed to secure some stunning examples of the 1886-P Morgan Silver Dollar, each in crisp Brilliant Uncirculated (BU) condition! Struck in 90% silver, these coins never looked better. Plus, we’ve sealed each one in its own 4" x 6" Statue of Liberty custom coin holder that includes details about the world-famous icon. Who knows – the very coin you secure may have sat in the pockets of one of the lucky few to attend the dedication ceremony!

This 1886-P $1 Morgan in Brilliant Uncirculated condition gives you the perfect opportunity to own a key-date Morgan! Order yours now!