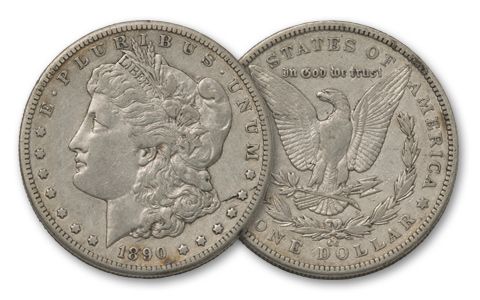 Availability: Out of Stock
This item is currently Out of Stock. Please sign up to be notified if this product becomes available.
Item #
249890
Add to Wish List Add to Wish List Wishlist is for registered customers. Please login or create an account to continue. Add to Compare
Recommended Products
Product Description

Back in 1890, the Philadelphia Mint struck nearly 17 million Morgan Silver Dollars. Over 2,600 miles away, the Carson City Mint struck just over 2 million. This low mintage alone would make these 1890 Carson City Morgans incredibly popular with collectors. But, in addition, folks out west preferred their money to be silver, and the Carson City coins exchanged hands frequently as “hard” currency. Most wore out and were melted, so now they're incredibly difficult to find in the high collector grade of Extremely Fine (XF). Here’s your chance. Snap up your own 1890-CC Extremely Fine (XF) Morgan Silver Dollars here today!