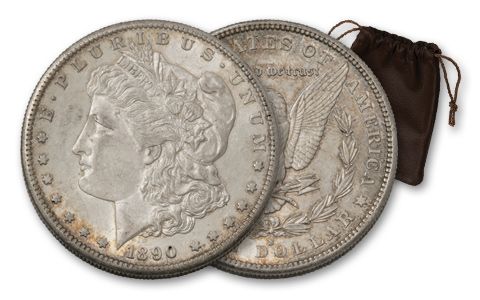 Availability: In Stock
This item will ship within 2 business days.
Item #
184409
Add to Wish List Add to Wish List Wishlist is for registered customers. Please login or create an account to continue. Add to Compare
Recommended Products
Product Description

Saddle Up for the End of the Frontier Morgan Silver Dollar!

The end of the great Western frontier was declared by historians in 1890, but these Wild West 90% Silver Dollars struck in San Francisco still jingled in the saddlebags of rugged cowboys, ranchers, and saloon keepers well into the 1900s. And no mint made Silver Dollars better than the San Francisco Mint. For this reason, the 1890-S Morgan offers uncommon beauty and value. And, contains nearly an ounce of silver! The 1890-S Morgan Silver Dollars are here in Extremely Fine (XF) condition and includes a special saddlebag pouch. Saddle up and ride to the phone to order yours!