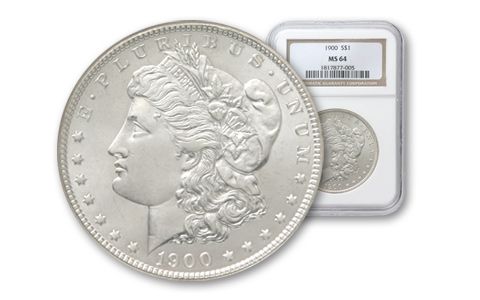 Availability: Out of Stock
This item is currently Out of Stock. Please sign up to be notified if this product becomes available.
Item #
224764

1900 – the Turn of the Century! Imagine the wonders that folks in 1899 were dreaming about as they waited for the new century to begin. Among the accurate predictions they foresaw happening in the 20th century were X-ray machines, watching live performances via television, moving sidewalks, dramatic advancements in automation, and a mobile society thanks to cars and air travel. Of course, they also predicted that we would domesticate whales and giant mutant seahorses, have flying cars, and live in homes that would incorporate automated bathrooms – seriously, automated bathrooms with robot lipstick applicators!? Well, in our ancestors’ defense, it WAS more than a century ago!

Bearing witness to those new-fangled ideas while people made that exciting journey into an unknown future were these coins. Struck in 1900 at the “Mother Mint” in Philadelphia, these Morgan Silver Dollars are a popular date for collectors. There’s just something special about seeing those double zeros in one’s collection – and now here’s your opportunity to add some of these key-date Morgan to your collection and in high-grade condition to boot!

We recently came across a number of these coins graded by either the Numismatic Guaranty Corporation (NGC) or the Professional Coin Grading Service (PCGS), two of the most reputable third-party grading services in the coin world. Each coin available in the offer has been certified as being in beautiful Choice Mint State-64 (MS64) condition, and we’re here to help you place them in your personal collection. But you’ll need to hurry – our limited supply won’t last! Grading service varies.