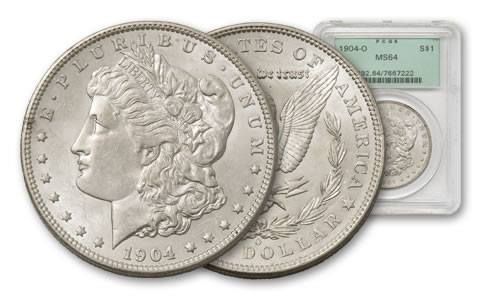 Availability: In Stock
This item will ship within 2 business days.
Item #
242469
CC Payments as low as
$79.50 / month
Add to Wish List Add to Wish List Wishlist is for registered customers. Please login or create an account to continue. Add to Compare
Recommended Products
Product Description

We were stunned by the sight when our buyer showed us a small cache of 1904 New Orleans Mint Morgan Silver Dollars he had just purchased. They're in Brilliant Uncirculated (BU) condition and Mint State-64 (MS64) graded by Professional Coin Grading Service (PCGS) or Numismatic Guaranty Corporation (NGC). Grading Service varies. We were surprised, not only by the spectacular high grade of the coins, but because this is the last-ever Silver Dollar from the New Orleans Mint. For decades it was an almost-never-seen coin. In fact, in 1960 they were valued at $150 - that's $1,123 in today's money! Luckily, many more were released by the Treasury in the 1960s. Now, they're becoming scarce again. Get yours while you still can. Call right now!