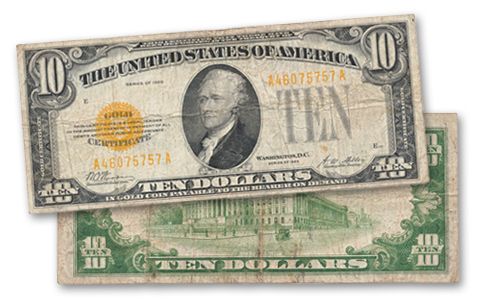 Availability: In Stock
This item will ship within 2 business days.
Item #
227718
CC Payments as low as
$149.50 / month
Add to Wish List Add to Wish List Wishlist is for registered customers. Please login or create an account to continue. Add to Compare
Recommended Products
Product Description

There’s Gold in Them Thar Notes!

Ever since the founding of the American colonies, gold coins were important tools of commerce. When gold was discovered in California in 1848, their importance for U.S. commerce grew by leaps and bounds. Physical gold was always popular out west, but easterners were satisfied carrying around paper notes that were redeemable in gold. This was the origin of the Gold Certificate.

In 1928, the government issued a new series of Gold Certificate. These notes were the new smaller size we all now carry in our pockets. And, if you look closely you’ll see that they are very similar to the notes we used to carry before recent redesigns. This $10 note features Alexander Hamilton, who is a founding father of the United States. The reverse has the same green backs as later notes, but the obverse shows gold serial numbers and a gold seal. At the bottom center, the notes proclaim that the face amount is “In gold coin payable to the bearer on demand.”

For a few years, these 1928 Gold Certificates circulated right alongside the better–known Federal Reserve Notes. In 1933, all of this changed. That year, the Gold Reserve Act passed, causing the Federal Reserve to transfer its stash of gold certificates and bullion to the Treasury. Most of the gold-denominated paper was destroyed, but a small number of notes escaped the bonfire. Here’s your chance to own a collectible right out of U.S. Gold history. Stake your claim before it’s too late!