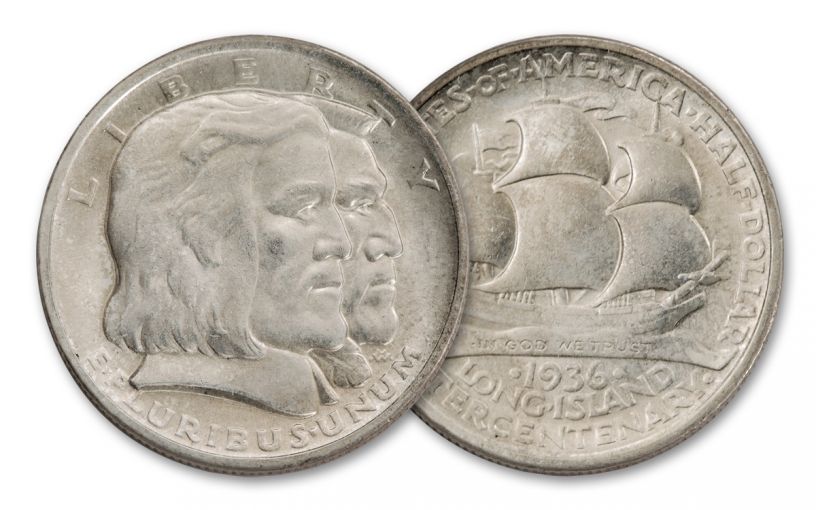 Availability: Out of Stock
This item is currently Out of Stock. Please sign up to be notified if this product becomes available.
Item #
349364
Add to Wish List Add to Wish List Wishlist is for registered customers. Please login or create an account to continue. Add to Compare
Recommended Products
Product Description

Better Late Than Never for the Long Island Half Dollar

Here’s a coin that proves the old adage of “an apple doesn’t fall far from the tree.” Struck in 1936 by the Philadelphia Mint, this Long Island Tercentenary Commemorative Silver Half Dollar pays tribute to the 300th anniversary of the first white settlement on Long Island by Dutch colonists. In addition to its beauty, silver content and low mintage, the coin is also significant for its designer: Howard Kenneth Weinman – the son of Mercury Dime and Walking Liberty Half designer Adolph A. Weinman!

The younger Weinman’s obverse of the Long Island half dollar features a bust of a lantern-jawed Dutch colonist overlapping a similar bust of an Algonquin Indian. The heads are partially imposed to symbolize harmony between the two races and a peaceful settlement – a notion that flies in the face of the legendary purchase of the island from the Indians for a reported $24 worth of trinkets and beads. The reverse depicts a 17th-century ship under full sail gliding across a scroll-like sea into which IN GOD WE TRUST has been incused.

The Long Island Tercentenary Committee was formed to plan festivities and events associated with the 300th anniversary of this settlement. The Committee was also charged with supervising the creation of a commemorative half dollar to help fund the celebrations. Though they planned well and came up with a superbly designed coin, they also fell behind schedule and the Long Island Tercentenary Commemorative Silver Half Dollar wasn’t released until two months after the celebrations had ended.

Despite this, the coins actually sold at a pretty good clip, going for $1 apiece. Although arriving late, only 18,227 of the coins were returned the following year for melting, leaving a net mintage of 81,826 coins. Now, more than 80 years later, you can secure one of these scarce commemoratives for your own collection – and in sharp Brilliant Uncirculated (BU) condition so that every detail stands out!

Pay tribute to the 300th anniversary of Long Island with the 1936-P Long Island Tercentenary Commemorative Silver Half Dollar. Click one to your cart today!