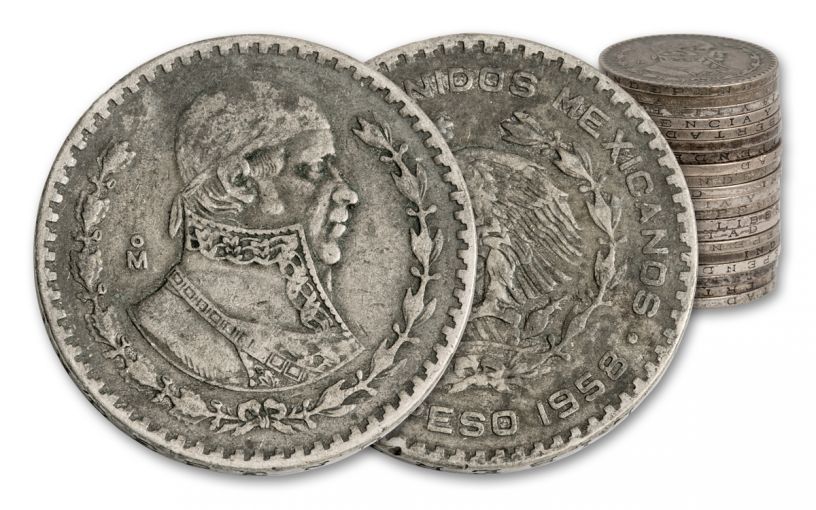 Get Your Very Own Fistful of Pesos!

José Morelos isn’t exactly the “Man With No Name,” but he is the man featured on Mexico’s last circulating Silver Peso. And now you can get a fistful of Mexican Silver Pesos all featuring the one-time priest who assumed leadership of the Mexican independence movement in the early 1800s. One of Mexico’s most revered revolutionary heroes, Morelos formed an independent government that declared Mexico’s independence in 1813. His nomadic army evaded Royalist troops until 1815 when he was captured and shot as a traitor.

Struck in 16 grams of 10% silver, these coins show Morelos facing right wearing an elaborate jacket and headband. The image on these large 34 mm coins almost makes him look like a pirate despite the fact that he is widely regarded as one of the country’s greatest insurgent military commanders. Seeing this gravel-faced warrior in the heat of battle had to have been an unnerving experience!

These Circulated Silver Pesos were minted from 1957 to 1967 at the famous Mexico City Mint — La Casa de Moneda de México — the oldest mint in the Americas with a history that dates back to 1535. The famous Mexico City Mint “OM” mint mark is clearly visible just to the left of the Morelos bust. Meanwhile, the reverse of each coin displays Mexico’s iconic National Coat of Arms that shows an eagle clutching a snake in its beak.

What also makes these coins so unique is the fact that they were issued at time when the United States didn’t even have a similar-sized dollar coin in circulation! And, with Mexican silver renowned throughout the world for its quality, many of these Silver Pesos have been melted at an alarming rate to get even the little silver contained within with no regard to the historic value of the coins.

Fortunately for you, we’ve amassed a small hoard of these coins and we’re making these Mexican Silver Pesos available in 20-coin rolls with orders being taken on a first-come, first-served basis. This is your chance to sock some of these coins away for yourself or secure a few to give as gifts for your friends. Order now! Dates vary.