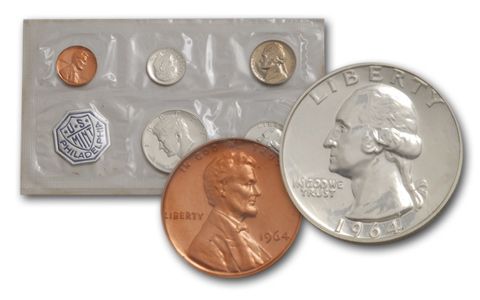 Availability: In Stock
This item will ship within 2 business days.
Item #
222232
Add to Wish List Add to Wish List Wishlist is for registered customers. Please login or create an account to continue. Add to Compare
Recommended Products
Product Description

1964 saw the introduction of the new John F. Kennedy Half Dollar, struck in honor of the President assassinated just a short time earlier. Kennedy's popularity and the prospect of the new Half Dollar drove sales of 1964 Proof Sets through the roof. By January 11th, 1964, the Mint halted orders for 1964 Proof Sets. Despite a published limit of 100 Proof Sets per person, many of the larger orders were filled only partially to give buyers of one and two sets a chance to obtain a Proof Set of the year. Even the limit of two sets was halted on March 12, because the Mint received orders for 200,000 sets in two days!

About the sets: 1964-S Proof Coins are found with Brilliant, Cameo, and Deep Cameo surfaces. Deep Cameo Proof coins are the most desirable of the three finishes. Collector demand is still high for Deep Cameo Proofs.

A small number of 1964 coins received a special finish, perhaps as an experiment in preparation for the Special Mint Sets that were to be produced the next year. The finish on these coins appears to be something just shy of the Special Mint Set finish, but also something that is vastly different and superior to the finish seen on regular issue coins. To date, all five denominations have been found with this special finish and from one to two dozen examples are known of each. Some of the Proof 1964 Nickels show a diagonal break connecting the top of Monticello's dome with the S of PLURIBUS on the reverse - these are known as the "Flagpole" variety.

Some Proof 1964 Dimes show a doubled die on the reverse. Check for the doubling on "UNITED STATES" and "ONE DIME". Some Proof 1964 Half Dollars are found with what is known as "Accented Hair", where the hair on Kennedy's head is more heavily defined. The "Accented Hair" variety appears to be thirty times as rare as the normal hair Proofs. Rare Half Dollar varieties include a Doubled Die Obverse (examine "IN GOD WE TRUST" and "LIBERTY") and a Tripled Die Obverse (examine "IN GOD WE TRUST" and "LIBERTY"). Beware of buying unopened 1964 Proof Sets. "Sealed" Sets are likely to contain substituted coins (and even non-coins). Flat packs should be examined for small tears or cracks in the pliofilm. Even a hole the size of a pin can let in oxygen or moisture, both of which will react chemically with the metal of a coin, causing unsightly spots.

1964 was the last year of the 90% Silver coins. Beginning in 1965, the Mints switched to a Copper-Nickel "Clad" coinage and only the Half Dollar was to contain any Silver (and then, only 40%).