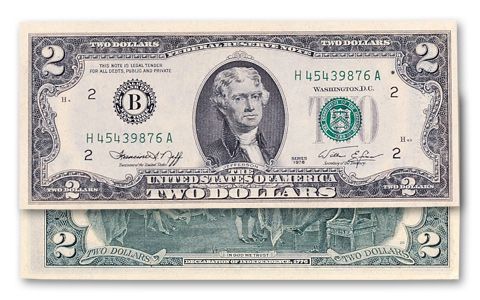 Availability: In Stock
This item will ship within 2 business days.
Item #
225558
Add to Wish List Add to Wish List Wishlist is for registered customers. Please login or create an account to continue. Add to Compare
Recommended Products
Product Description

The $2 Bill Celebrates the Bicentennial

In spite of its relatively low denomination, the $2 bill is one of our nation's most seldom seen - or used - bills. This is due in large part to the Treasury Department's low production of the note - approximately .5% of all U.S. notes produced are $2 bills. The other reason is purely psychological; many Americans remain remarkably superstitious about spending it, which further decreases its circulation. In fact, the $2 bill is so limited in circulation that few electronic cash registers, money-changing machines and vending machines accommodate it.